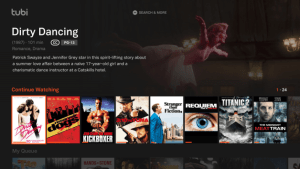 The platform, which launched locally less than six months ago, says Australia and Canada have reported significant growth in total view time, up 357% in 2019.

While the company hasn’t released individual figures for Australia, it claims total view time across all marketplaces was 163 million hours in December alone, a year-on-year growth of 160%.

The figures for the platform would likely have been strengthened by the holiday period.

The growth for the ad-supported service shows there’s still a demand for free content at a time when paid services, such as Netflix, Stan and Disney+, are saturating the market.

“Our growth over the last year is a clear testament to the success of our focused strategy in a now-cluttered marketplace,” says Farhad Massoudi, CEO of Tubi.

“We’re excited people globally have embraced Tubi as a complement to subscription video and aim to deliver an even larger library of premium content in 2020.”

Tubi plans to expand its Australian library to match the US’s 15,000 titles, hoping to provide Australians with the “largest free library” in the country.

The US-based service, which was founded in 2014, is available in the US, Canada and Australia, with plans to enter the UK and Mexico.