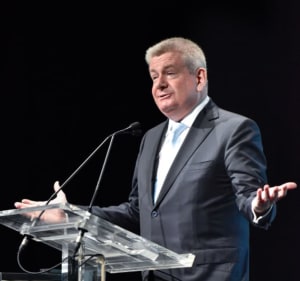 Communications minister Mitch Fifield has reiterated the government’s commitment to bringing in media laws that reflect the realities of modern media at the National Radio Conference in Melbourne today (7 October).

In his opening address, Fifield told the radio industry that a further reduction to broadcast licence fees is an “active consideration” alongside other media reforms currently being considered by government.

Following the decision in the May budget to reduce broadcast licence fees by 25%, the media industry is set to see a net a boost of $163 million over the next four years, he said.

However, CRA CEO Joan Warner countered that by saying that of that $163 million, radio only gets about $5 million, “so we are still looking for more relief from the government in that area.”

Fifield continued by saying his aim is to pass the media reform bill as quickly as possible.

“The media reform bill package, as you, know seeks to repeal the media control rules and the two-out-of-three ownership rule. I’m hopeful these reforms will be considered and passed into law as expeditiously as possible,” he says.

“Changes in technology are driving seismic shifts in how we consume media and our focus as a government is that media laws reflect the realities of today’s world. We are pressing on with reform. [The 2016/17 Budget reduction in fees] recognises the media landscape for radio and TV has changed dramatically since they were introduced in the 1950s. The digital environment is increasing competition for audiences, for advertising dollars and it's placing increasing financial pressure on commercial broadcasters whose main competitors pay no licence fees.

“As a whole the reform agenda seeks to make sure our media laws reflect the world we live in today, recognise the changes in technology and consumer habits, and give transitional media companies the opportunity to compete and adapt in a changing world. We have a bit of work to do together,” he told the room.

Senator Fifield also sought to reassure the audience that any changes to licence fees and spectrum prices would aim to make sure that overall, licensees pay less – not more, despite fears that would not eventuate. At present, Australian broadcasters pay licence fees equivalent to 3.375% of annual sales. This is considerably higher than the 0.21% licence fee in the UK and regarded as one of the highest broadcasting taxes in the world.

"Some of you fear that any change to license fees or spectrum pricing could end up paying the same or more to government. Should we be making any changes it would be to make sure that licensees are better off. That is the objective,” he says.

Last year, Fifield met with the CRA to discuss how the radio industry could reduce red tape.

Interested parties lodged their responses to the proposed media reform package at the end of September, with Nine Entertainment Co and Seven West Media broadly opposing any package that does not significantly reduce licence fees.