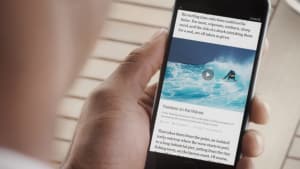 Facebook has revealed a reporting error of Instant Articles traffic on iPhones – the fourth misreporting issue since September.

The error, which has now been rectified, underreported iPhone traffic from Facebook in ComScore products, affecting “a small number” of publishers between 20 September and 30 November 2016.

“ComScore alerted us to the issue, and we’ve since identified this is a result of a recent Facebook update that impacted publishers using our legacy comScore integration who support HTTPS on their websites,” Facebook said in a blog.

“This caused an underreporting of iPhone traffic from Facebook in comScore products between Sep 20 to Nov 30, 2016. iPad and Android traffic were not affected.”

Facebook said it has worked with ComScore to provide accurate estimates for the publishers affected.

The furore around Facebook "marking its own homework" escalated in September when the social network admitted it had been over inflating video view metrics by up to 80%.

Since then, Facebook has made several more misreporting revelations as it carries out an internal investigation over the accuracy of its metrics.

These have been communicated via its metrics FYI blog, an attempt to offer more transparency, “clarity and confidence” in its metrics.

Some brands remain unmoved by the revelations, telling AdNews Facebook campaigns produce good results when stacked up against a brands own measurements of success and KPIs.

But many in ad land and the media will view this as another blow to Facebook’s credibility, raising further calls for digital media companies to produce a single set of industry metrics that can be verified independently.