Facebook must do more in 'bonkers' world of social media abuse 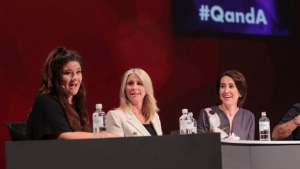 Facebook must ‘step up to the plate’ and crackdown harder on abuse, says Australian newsreader and journalist and advocate Tracey Spicer who described the social media giant as “completely hopeless and negligent” in dealing with her personal abuse online.

Speaking at Commercial Radio Australia’s (CRA) Radio Alive 2018 event in Melbourne, Spicer, who featured in a panel hosted by the ABC journalist Virginia Trioli, was responding to an audience question about receiving online backlash.

Spicer said when social media began exploding particularly over the past decade, she thought it would a positive thing for society as it would give marginalised communities a voice.

However, predominantly in the last couple of years, she said it has gone into a “whole toxic realm”.

“Particularly if you are a woman or a person of colour and you express a particular type of view - you can get the worst rape and death threats,” Spicer said.

“I mean, they threatened to rape my children. It's just ridiculous."

Also speaking on the panel was Southern Cross Austereo-owned Hit Network radio host Tanya Hennessy, who said it’s hard to get upset by some of the social media backlash “because it's just so bonkers”.

“You've got to be mindful of what you can and can't accept,” Hennessy said.

“When you put something out there in the media you’ve got to ask yourself, ‘can I accept the backlash that comes from this?’.

“I've done that a few times. I've talked about RUOK? Day and some stuff with my mental health and suicide and I realised, once I went to air, I shouldn't have said it. I went too far, but sometimes, in this industry, you've got to go too far to know where the line is.”

Spicer adds that the “bizarre” social media realms have forced her reconsider her limits when it comes to tolerance.

“I’ve come to this stage yet where I just put really strong boundaries on it,” she said.

“I immediately block, mute or report. I've reported three people to the police and they're about to be charged.”

Despite such police action, Spicer wants the social media firms to crackdown harder on abusive behaviour and trolls.

“I would like to see the social media companies taking more responsibility because I've dealt closely - particularly with Facebook with this police case - and they have been completely hopeless and negligent. They need to step up to the plate.”

While the likes of Facebook and Twitter in particular say they are platforms, Spicer says they're also publishers and news outlets as well, and sees them as being dragged “kicking and screaming” to the regulation table.

Trioli added that it’s a global issue, is not something Australia alone can address, but added that such companies “need to be taken to task on”.

AdNews understands Facebook did remove several pieces of reported content relating to behaviour towards Spicer, for violating its policies.

In relation to Spicer's comments about Facebook being hopeless and negligent, a Facebook spokesperson said: "We want people to be able to express themselves freely but also feel safe when using Facebook.

"Under our policies, we permit open and critical discussion of people who are featured in the news or have a large public audience based on their profession or chosen activities. We remove credible threats to public figures, as well as hate speech directed at them – just as we do for private individuals."