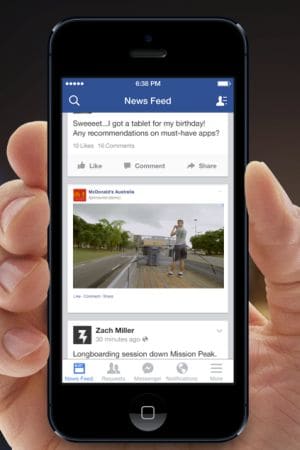 Facebook is rolling out its ad preferences tool to Australia and five other markets today, giving users more control over the types of ads they are served on the social networking site.

The tool allows users to manually curate the types of ads they want to be served on the social networking site, making advertisements more relevant rather than just being served what previously visited sites and cookies suggest may be relevant to the user.

Ad preferences, which went live in the United States six months ago, will be rolled out over the next few weeks in Australia, Canada, France, Germany, Ireland and the UK with Brian Boland, VP of GMS product marketing and AdTech for Facebook telling AdNews that Facebook has seen significant user engagement with ad preferences.

“We're really pleased with how it's gone,” Boland said. “There are a couple of things that have been really exciting, people who engage with ad preferences are actively curating their profile, they're not just going in and removing things they're adding as well, which helps them get better more relevant ads”.

The roll out will see changes made on one device brought across all devices, so that users only need to update their preference once for them to be seen across multiple devices.

With the increase in the level of targeting available to advertisers due to users tailoring their own profiles to what interests them, this could see the price of Facebook inventory rise.

“Our system its entirely auction driven, the better we do with matching ads to an individual it actually helps the advertiser because their return on investment on that ad is better, so as more and more advertisers are bidding into the system prices will naturally go up,” Boland said.

When asked about how this specifically changes the audience advertisers can expect, Boland said that: “advertisers will always be able to reach people in very qualified audiences – they wouldn't have seen material changes or changes in the types of audiences that they've seen, advertisers are more interested in the fact that we are being transparent with people and they feel good about the controls that we're offering.”

As part of the ad preferences announcement, Facebook has also introduced privacy basics which will give users tips and a how-to guide for taking charge of their privacy settings on the social site. Privacy basics offers interactive guides to answer the most commonly asked questions about how users can control your information on Facebook.

The social site also announced it is testing a buy button which would allow purchases without users leaving Facebook.