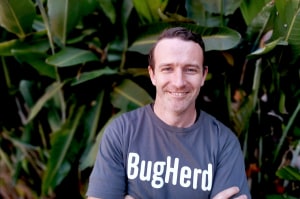 Aimed at helping marketers effectively communicate website changes to their development team, the business allows its marketers to leave annotated feedback on a website that can then be actioned by developers.

Operating on a tiered subscription model, it’s a cleaner, cost-effective way to communicate changes that need to be made to the development team. As part of the appointment, Neville has also invested in the company.

“It’s time for BugHerd to move back into the spotlight. We think that BugHerd is an incredibly useful tool for marketers and their agencies, and the time is right to relaunch the product," Neville says.

“Many agencies have evolved since the product first launched but communication issues between non-technical marketers and the web development team is as much as a problem as ever.”

Neville had held the role of head of digital with the IPG-owned media business back in 2014, while also holding similar positions with rival media agency Zenith. He also worked as a media advisor for Coles in a consultant capacity.

BugHerd is leveraged by over 2000 companies across 100 countries. Its clients include eBay, Amazon, Hilton Group and Dyson.

Neville first joined the company in 2014 as a consultant and returned in 2018 to lead the company’s new charge for growth.

The news marks BugHerd’s first major announcement since its capital raise in 2014. Due to plateauing revenue, BugHerd employed a skeleton crew to manage the product between 2015 and 2018.

Despite this, its user base continued to grow and many customers who had signed on as early as 2012 continued to use the product.

BugHerd has now rehired many of its old team and is on track to double the size of the business over the next two years.