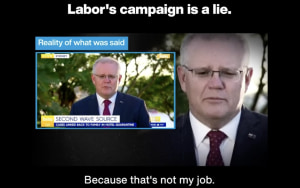 The Liberal Party has released an ad attacking the Labor Party, call its attack on prime ministger Scott Morrison a "lie".

The 60 second spot, shared on social media, aims to provide context to Morrison’s “that’s not my job” comment that Labor has focused on.

Labor’s No More Morrison ad, which featured the soundbites at the end of a 30-second video, said that “no-one gets it right all the time, but Morrison makes too many mistakes”.

The Liberal Party hit back by showing snippets of the full exchanges which prompted Scott Morrison to tell reporters that “that’s not my job”.

One was in response to asking why he hadn’t lost patience with Victorian premier Dan Andrews, another was in relation to telling Australians how they should spend their money and the third was an answer to asking whether he was overwhelmed.

“I’ve been around election campaigns since 98. I don’t think I’ve ever seen an ad so duplicitous.

"If this was my campaign’s ad, I’d be ashamed; that’s a low rent American style campaign ad and I would say to Australians, we’re better than that."