Down with the trolls 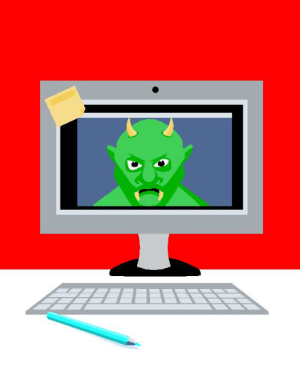 This is part two of a four-part series which appeared in the AdNews April 2019 magazine and is part of a new feature AdNews introduced last year called Spotlight. Support AdNews by subscribing here. See here for part one.

Before you press send on your anonymous vitriolic comment, stop and think twice as the consequences for your action may have far more serious implications than you intended.

Adland veteran of more than 30 years–turned founder and CEO of BrainLight Wellness, Mike Morrison, spent a short period at Network Ten and after leaving the network was “trolled mercilessly by the anonymous” — not for days, but weeks.

As someone who suffers from depression, he said his suicidal ideation increased dramatically and being bipolar, the effect of this trolling was devastating.

“I’m utterly staggered by the level of unaccountable cruelty that exists in society, let alone in a so–called ‘professional’ forum,” Morrison said.

“These conveniently anonymous comments are splinters in the brain of the person being trolled. They are public at scale, which is humiliating like no other generation has suffered.”

He said social and professional embarrassment has many consequences; they don’t just defame the person whereby their career can be damaged unfairly, but it affects their family, and in some cases requires counselling to enable loved ones to adopt coping strategies to deal with the victim of “professional trolling”.

“When you are confident, you don’t worry about how great someone else’s work is and if they will steal your client because they are better,” he explained. “It’s about actually being able to say, ‘wow, great job, well done’ to your competitors openly.

“Our culture encourages that, we don’t tear other agencies down, we want to celebrate their greatness and spark our next piece of brilliance at the same time.”

Rennie said undoubtedly that one contributor to mental health problems are the vitriolic anonymous comments that unnecessarily debase people or their work.

“The figures of depression and anxiety in our sector are astonishing, and negativity is not helping,” he said.
“The trolls may see it as a bit of sport; a game they play to pass the time during their day. But, I have seen the damage it can do to creatives.

“Juniors leaving the industry because they’ve never been warned about this sort of stuff. New directors taking it to heart on their first leadership gig that they become gun–shy.”

Being a great creative, Rennie said, means you are both functionally and emotionally invested in work, so to do this your emotional side is really open.

“In taking that guard down, you are susceptible to feelings coming in and out.

“When negativity comes your way you take it very personally, no matter what level you are and it begins to hurt and wear people down,” he explained.

While negative comments may seem harmless to those who read from afar, or somewhat funny, Rennie urged people to remember that someone has put their creative soul into that work.

The comments made are on pieces of work that have been through rounds of review, brand changes, legal corrections and feedback, so often it’s not the original idea that gets across the line and it could’ve been a battle to get there.

So, who is to blame?

Some publishers tend to allow trolling because the commercial model of clicks, likes and views helps monetise content, but when the cost of that currency is the diminishment of people, is that fair?

Rennie said such publications are more than entitled to publish what they like, but without the veil of anonymity.

“Small changes like a requirement to sign-in really takes the bravery away from trolls. It kills the idea that they can bully without consequence.

“It becomes a place of discussion and positive critique,” he said.

Anyone affected by this story can contact Lifeline on 13 11 14.

Colenso BBDO creative director Maria Devereux’s top five daily tips
1. Meditation: I think any form of daily meditation is useful. For me, it’s just as important as brushing my teeth. And while I’m better at brushing my teeth than meditation, I still turn up to sit still everyday, knowing it will become easier with practice.

2. Communication: I challenge myself to never be too proud to talk. I make sure I ask my friends and family for help if I’m feeling overwhelmed and often that opens the door for support from those people who help me thrive.

3. Exercise: This gets me out of my head and into my body so I make sure that it’s a part of my life. When I’m running, I’m less likely to get lost in nonsense thoughts about a conversation I had three days ago or speculation about what I’ll say to that person when I see them again.

4. Gratitude: At the end of each day I ask my son, ‘what’s the best thing that happened to you today?’ And then I tell him what mine was. It’s a very basic form of gratitude, but it helps me reframe my thinking after a busy day.

5. Fun: When times get tough, I turn to the things that truly make me happy and do them as much as possible. For me it’s singing, but as long as you’re smiling it doesn’t really matter what you’re doing.

For part one see here.