Don't be boring: LinkedIn marketing boss on big rocks, hacks and how to succeed in content marketing 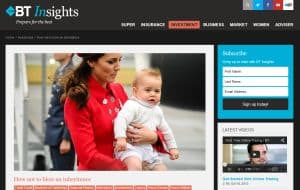 That means great headlines, images, a well-planned editorial calender and presenting and re-purposing information in different ways to see what drives hits.

Speaking at the ADMA global forum in Sydney, Tindale cited BT Financial as a brand that had cracked the platform for content marketing.

The financial services firm recently notched up over a thousand shares on LinkedIn – more than many mainstream publications ever deliver – with a story timed to coincide with the royal visit. It was titled 'How not to blow an inheritance', alongside a picture of prince George, who one day stands to inherit a few quid.

“What a cracking headline, and a great pic too,” said Tindale. “Both are so important.” Choosing the right image, he suggested, can double engagement rates, so brand publishers should A/B test “because it makes a big difference”.

Stories had to be entertaining as well as valuable, “because nobody wants to read anything boring any more, even on LinkedIn”. So content has to be “valuable and snackable... insightful, informative and inspirational”.

So is that the end of the 30 page whitepaper on LinkedIn? No, said Tindale. It just means brands have to “chunk down the big rock” of weighty content into slide-shares, blogs, two minute video snippets, seminars, as LinkedIn did for a recent whitepaper of its own “and it just lives on”. The same applies for any content following events.

Brands just had to realise the value of what they already had, he suggested. While there were “a lot of agencies doing content, some better than others,” many brands could do it in house, he said, just by “chunking down the big rocks”.

Other tips for success on the platform were mobile optimisation, engaging with members and using video.

Tindale also suggested that brands shouldn't try to “hyper target” because they could miss out on prospects, but later clarified that to avoiding “poor targeting”. IT vendors had used the platform only to target c-suite executives but had broadened out when they realised they were missing out on “a huge chunk of the audience” that made the decisions, namely, those that report back to the c-suites.

The most important aspect, he said, was to remember to earn the right to make the hard sell.

The synopsis was “jab, jab, jab, hook … building relationships is all about listening and asking questions. It is easier than people think but it is incredibly powerful”.