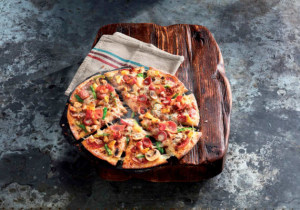 In this AdNews print feature Domino’s chief digital officer Michael Gillespie talks about the brand’s 10-year digital journey, what keeps the brand hungry and how innovation is not only affecting the bottom dollar, but how it can help buoy the local economy. Subscribe here to read it hot off the press.

A robot division, an innovation lab and a focus on artificial intelligence, add a ping-pong table and this could be any business in Silicon Valley. Instead, these are just three of 10 projects that were announced by Domino’s at its inaugural innovation event Abacus last month.

The event, so-called because the Abacus is the first ever measurement device documented and the brand sees it as a symbol that from small things big things can grow. It used the event, which will be held twice yearly, to present its latest innovations to media, those in the industry, fellow innovators and shareholders to show just how far the brand’s ideas around innovation have grown.

However, for Domino’s this has been a 10-year journey, which started with the company trying to find ways to keep its pizzas hot with its ‘hot cell bag’ technology. From there it has evolved into the brand launching Abacus and creating in–house innovation lab, DLAB, where any of Domino’s staff and external startups can go to generate ideas.

Set itself apart it has, with Domino’s being the one to beat when it comes to digital and technological innovations, and it’s proving a hard business to trump. It recently launched ‘On Time Cooking’ in Australia which tracks customers via GPS and commences cooking their pizza order to coincide precisely with when they arrive at the store to collect it. It follows the ‘people–powered pizza’ which allowed customers to design their own pizzas and then earn money if other people bought their recipe.

Coming down the line are zero-click online ordering and its 3/10 project, which aims to see the business get its in–store cooking time down to three minutes and delivery time down to 10. There’s also a longer–term data play that will see the brand better utilise its mass online ordering and customer data, and also its robotic unit, DRU, which produced the world’s first autonomous delivery vehicle in March this year.

These innovations are obviously no small investment by the brand, but Gillespie explained that Domino’s is focusing on digital and in particular digital innovations, because this area is seen as a growth driver for the business.

“We see ourselves as having a couple of pillars of our growth. One is technology and we want to be seen as a technology leader in the space of innovation, but we also don’t want to forget our ground roots, which is as a pizza company,” he said.

Gillespie has held the top digital job at Domino’s for two years. Previously he was online marketing director and has been part of the company’s innovation and digital transformation since 2008.

He wouldn’t be led on how much the business currently spends on innovation versus other channels, but if it wasn’t working, Domino’s wouldn’t be pushing it so strongly.

For the brand, spend in innovation is being partnered with aggressive investment in opening new stores and putting new technology in–store such as high–tech ovens, and advertising that a Domino’s store and its pizzas are never far away from consumers. When asked about the ROI difference between advertising and innovation, Gillespie explained the two couldn’t be compared because they’re too different, but added innovation can have a “halo effect for the brand that can have a much longer lasting effect than one TVC or one print piece”.

Some of the innovations might seem ‘stunty’ but a measure of the company’s innovation and digital success came when the business revealed its half year results in February, with Domino’s Australia and New Zealand reporting a 27% growth in earnings, with same–store sales jumping 13.8%. At the time, the business cited the launch of “disruptive digital initiatives” such as SMS ordering for strong network sales.

Globally, the company reported a net profit after tax of $45.6 million, an increase of 56.7% on the prior corresponding period.

Another measure of success is how the business is faring in the fast food sector as a whole, a space that has been challenged by the rise of the nutritionally conscious consumer.

While Domino’s has a much smaller market share compared to the famed golden arches, a report undertaken by IBIS World this month highlighted the business’ revenue growth indicated a “significant outperformance of the overall industry”.

IBIS credited this to Domino’s focus on innovation and convenience in its delivery services, combined with effective cost controls that have led to improving profit margins over the past five years.

While digital is certainly a growth driver for the business now, Gillespie explained this journey has required the brand to evolve what it is doing to ensure that it avoids diving in head– first to tech that isn’t relevant to the brand.

“The biggest challenges [we faced] were trying to stay ahead of not only our own journey but also the retail market,” he said.

Now, according to Gillespie, it’s all about ensuring the brand is on the right platform and actually talking to relevant customers rather than adopting new tech, for new tech’s sake.

“If your customers aren’t there and you’re jumping in way too early, maybe you need to question is this the space we should be in, or can we utilise our funds and resources in other sectors of the innovation space?” he said.

Gillespie reckons that innovation isn’t just good for a business, it’s good for the economy.

But, he wouldn’t comment if there are other companies talking the innovation talk, but not doing the walk, rather, he explained that by fostering innovation, businesses ensure the best and brightest stay in Australia.

“We want to keep the brains trust and the innovators in this country,” he said.

“People who are putting these innovative ideas out – this is IP that we can create locally in Australia – so I really hope that these companies are following through because we’re going to have a huge brains trust of great minds in Australia if that’s the case.”