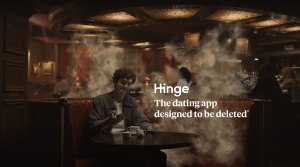 The four new spots playfully feature daters sharing the news with their profile pictures that it’s time to break up. While it’s been a good journey, they finally met their perfect match, and it’s now time to say goodbye.

“Breakups are hard. But breaking up with your dating app is pretty fun," Hinge creative director Josh Yeston says.

"It’s something so many of us have been able to do, and we wanted to tell that story.”

The new spots are a part of Hinge’s ongoing Designed to be Deleted campaign and were produced in partnership with advertising agency, Opinionated.

Hinge wants to be the most effective dating app for singles looking for meaningful connections and is currently setting up a date every two seconds.

The new spots showcase the app’s ability to get its users off the app and out on great dates that lead to a relationship.

“The best advertising starts out of honesty and humanity. For us, this campaign was fun to work on because we had so much combined experience with life on dating apps," Opinionated senior art director Cameron Sloane says.

"The app deletion phase of a relationship is a transitional one, and as such it can be a bit strange, all the while exciting. So it was fun to visually represent that truth and let that scenario play out in a fictional construct."

The campaign, which launches on July 12 in the United States, will roll out globally over the next few months across an assortment of media platforms, including television, video on demand, streaming, Facebook, Instagram, and Snapchat.