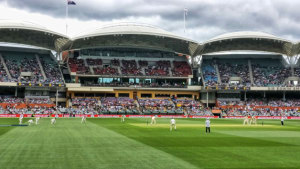 The Ashes day-night test in Adelaide is one of the major highlights of Cricket Australia's sports rights package. Photo: A Hickman.

The first barbs have been thrown in what looms as one of the biggest stories in sports broadcasting this year – the negotiation of new cricket broadcast rights.

AdNews approached several industry experts to run the rule over the different contenders and assess the scenarios that are likely to play out.

At present, domestic cricket broadcast TV rights are split between Nine and Ten. Nine pays CA close to $100 million each year for the rights to broadcast test matches, one day internationals (ODIs) and international Twenty20s in a deal that expires after the summer. About $60 million in value of Nine's deal with CA was to integrate its TV broadcast on CA’s own digital assets.

Ten picked up the Big Bash League (BBL) for about $20 million per annum.

When rights were last thrashed out, Cricket Australia (CA) managed to increase its deal by 118% to $590 million.

Marc C–Scott, a sportscasting expert and lecturer at Victoria University, says Nine will want more “bang for its buck” this time around, which means streaming rights. “Nine are aware that to get the money they want back, they needs more than broadcast rights,” he said.

Nine's director of sales in Melbourne, Sam Brennan, has led the broadcaster's sports sales over the past few years.

He recently told AdNews that Nine would “categorically” make a loss on its coverage of The Ashes. Other Nine insiders have stressed the network's appetite for cricket could be tested if Cricket Australia took to inflating the price too much.

This could be posturing, but rights inflation is already stretching FTA TV ad-funded business models.

Another industry insider, who agreed to speak to AdNews on the condition of anonymity, believes the BBL has become the jewel in Cricket Australia's crown.

“For me the interesting dynamic is how Cricket Australia is taking this to market,” the insider said. “Will it get more by leveraging Big Bash and bundling this with tests and ODIs or is it willing to try and piece it all together and the sum of the parts will add up?”

In the most recent season, the BBL posted an average audience of 947,000 viewers and increased its commercial share of 25 to 54-year-olds from 32.3% to 33.6%. The Ashes test series posted higher average TV audiences, but non-Ashes years struggle.

C-Scott expects Nine and Ten to launch bids to keep hold of their prized assets, and it’s unlikely FTA TV won’t be invoved, but it's others that could determine how broadcast rights are farmed out.

“For the value to go up, I think Foxtel would have to be involved in some way. You might see a negotiation between Ten and Foxtel to get Big Bash, and there are so many games it could split.”

Another possibility is that CBS could look to bring the “US feeling” BBL stateside, building in marketing value to any potential Ten bid.

Then there are dark horses in this race, such as telcos Telstra and Optus Sports as well as internet giants Amazon and Facebook. They are companies not covered by Australia's anti–siphoning laws, but with an interest in sports.

C-Scott points out: “If Amazon wanted to come in and take the rights from Nine, Seven or Ten, it could. There’s nothing stopping it.”

For CA, deciding a TV broadcast rights strategy is a careful balancing act between growing its coffers and making the sport accessible to fans and players. This means it's likely FTA TV will have a significant role to play, even if it's in partnership with a subscription TV operator.

“In the UK, pay TV has about a 50% penetration and when cricket went to Sky, the participation rates dropped,” Scott explained.

“In Australia there's only a 30% penetration of pay TV so you would definitely see that decline in participation.”

Nine: Will be keen to retain its coverage of tests and ODIs but will look for more value in any future deal. This can be done either through bundling the BBL with internationals or by expanding Nine's rights to control streaming rights rather than partner with Cricket Australia. Given Nine's public posturing that it is not willing to spend a huge amount more and cannot make money from its current rights, getting more value through streaming rights appears more likely.

Ten: Its efforts to help grow the BBL in recent years should not be unstated. Although it would seem unlikely Ten will be able to afford all of the BBL rights if they double or triple in value, as has been predicted. However, it's likely Ten will look carve out a number of games in an expanded BBL season with a non-FTA player.

Fox Sports: Will view cricket as a way to retain winter subscribers, particularly as it has been forced to compete more with in the SVOD, offering sport at a lower price point not being locked into annual contracts. The BBL will be particularly attractive to compliment Fox Sports coverage of international cricket abroad.

The telcos: Optus Sport already shows cricket highlights and could look to expand this with live content, simulcast the BBL with a FTA network. Telstra has streaming rights to major winter codes – the NRL and AFL – and could view cricket to add summer sports content to its schedule.

The dark horses: internet companies like Facebook and Amazon. The latter has dipped its toes into sportscasting recently with streaming rights to tennis in the UK and NFL in the US. Facebook failed with an audacious bid for IPL rights. Amazon appears more likely to launch a bid and their interest could be for international rights. It may be too soon for either to look at Australian rights.

AdNews prediction: Nine and Ten to renew their current rights with Fox Sports to simulcast BBL. The interest will be in whether new players shake up streaming rights, whether FTA networks control these or whether CA wants to partner with a sportscaster.