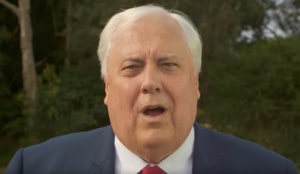 Over the last two weeks UAP has spent an estimated $3.5 million, Liberals $1.57 million and Labor $1.54 million, as this chart from Nielsen shows:

The overall sentiment of the ads during the two weeks was 69% positive and 31% negative, according to anlysis by Nielsen.

Mining millionaire Palmer is estimated to have spent more than $25 million on advertising since he announced in September last year his bid to re-enter parliament.

This is more than the $16 million spent by major parties for the entire election campaign of 2016, according to Nielsen.

A big portion of Palmer's ad spend is going to TV.

Rich lister Palmer, who served as the member for Fairfax for one term in 2013, is this year vowing to run candidates in all 150 House of Representatives seats.