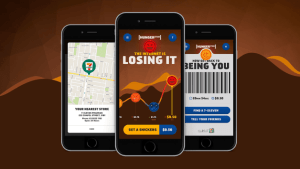 Clemenger Melbourne’s Hungerithm for Snickers campaign is set to be rolled out across the US and Europe.

The idea was first launched by Mars Chocolate Australia in May 2016. Due to its success, America will now be the next region to roll-out the platform through a nation-wide partnership with 7-Eleven that sees the idea hit more than 9000 stores.

Hungerithm’s launch in the US sees the platform pick up where it left off, rewarding consumers with cheaper Snickers’ bars the angrier the internet gets.

Since its debut, it has picked up dozens of awards locally and globally, including 21 at Cannes Lions, which contributed to Clemenger Melbourne being named Agency of the Year.

Clemenger BBDO Melbourne CEO Nick Garrett says the global roll-out of Hungerithm was a great example of creativity being used in a powerful way to deliver significant business results.

“As creatively powerful as Hungerithm was, the true beauty of it was in the simple and effective retail integration that enabled the creativity of the idea to impact sales and truly drive results,” Garrett says.

“We’re incredibly proud of the team and of the recognition by the global Mars business and its regional retail partners who have shown immense belief in the power of our idea and its potential for scale."

The roll-out is being managed by the Clemenger Melbourne team alongside BBDO affiliates in each region.