Christmas ads 2019: The best from around the world 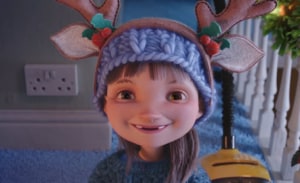 'Tis the season for blockbuster holiday commercials and we’re keeping track of all them right here.

See below for all the Christmas marketing extravaganzas, and check back often, as we’ll be adding more global and local executions as they go live.

Apple
A heart-wrenching three-minute ad to tug on the heart strings and make you crave family closeness. The ad centres on two arguing daughters, who seem to only bond over an iPad and create a beautiful and emotional slideshow for their mourning grandfather. You’re going to need christmas tissues.

Comcast/Xfinity
E.T is back but not as you’d expect. Comcast and Sky, in a four-minute ad to promote Xfinity, reunite the alien with an aged Elliot played by the original actor Henry Thomas. The ad centres around E.T returning to Earth to visit Elliot and discovering all the technological changes that have occurred on earth.

McDonald’s
McDonald's has continued to make the world #ReindeerReady by releasing its 2019 animated Christmas ad. The 90-second spot, created by Leo Burnett, centres around little Ellie who, after being shut off from her sister, confides in a reindeer she befriends in her front garden.

Joules
Joules, a british company, has paired with the stop-motion brilliance of Aardman to craft a creative and charming commercial featuring the famous characters Wallace & Gromit in their own 40-second ad. The advertisement depicts Wallace presenting a button which with a single press decorates his living room and dresses Gromit in adorable angle attire. It’s everything you would expect from this famous and now festive duo.

Coles
Coles, with the help of Big Red, has released a nostalgic Christmas commercial, presenting festive family footage from 1914, the beginning of Coles, to the present. The 45-second spot shows why they have always been Australia's choice for Christmas.

Big W
Big W partnered with M&C Saatchi to release a trailer depicting how much effort goes into that special Christmas morning by using clever camera work and techniques to entice and focus the viewer in its brief, cheery 30 seconds. Opening on that initial celebration of a child gleefully celebrating her new doll only for the time and sequence of events to quickly reverse and depict all the effort and preparation a parent put into the celebration, all while showing how Big W helped every step of the way.

IKEA
IKEA’s “Silence The Critics” was produced by MJZ and was a welcome surprise to this years collection of Christmas commercials. The 90-second ad centres around a woman being prompted to host a Christmas gathering only for various household ceramics and items to spring to life and hilariously diss the house’s design resulting in the woman taking action and using products from IKEA to spruce her home into a jolly festive house fit for the occasion.

Aldi UK
Aldi has continued the story of Kevin the Carrot with this animated delight where he thwarts the jealous Russell Sprout with the help of other Christmas-related foods and his own carrot family. The 70-second animation is charming and very appealing and the song will have you forget all about those jingle bells.

John Lewis/Waitrose
John Lewis and Waitrose teamed up alongside Adam & Eve/DDB to bring a truly magical film to our television sets. It tells the story of Ava and the adorable Excitable Edgar the Dragon as he tries desperately to join the festivities, only to ruin the celebrations with his flames. The two and a half minute story is beautifully animated and without a single word of dialogue spoken, “Can’t Fight This Feeling” plays over this heart-melting experience.

Walkers
Walkers joined forces with AMV BBDO and brought out the tinsel this year with Mariah Carey. The singer reprises her staple “All I Want For Christmas Is You” with a hilarious story stretching over a prompt 60 seconds. Mariah exits her set handing out generous and eccentric gifts only to tussle over a bag of Walkers chips with a man dressed as an Elf.

Facebook
The Christmas spirit is about coming together which Facebook’s “Mama Claus”, created by Wieden+Kennedy, exemplifies. The 90-second ad depicts a mother off on service as a group of other mothers put in the extra effort to ensure her family have a special and brilliant Christmas. Who knew Christmas could be joyful and powerful?

Ebay
The Christmas creep is a marketing scheme that’s a nuisance known to all shoppers and Ebay has playfully addressed this in their latest 66-second spot. Presenting various families struggling in an exaggerated shopping mall, the ad, created with Edelman, reminds us that Ebay is not only exempt from this, it’s always fair priced.

WWF
Charity environmental organisation WWF and Uncommon Creative Studio have created a captivating 60-second commercial which surprisingly has next to nothing to do with Christmas. Instead it focuses on an adoption scheme to save the rainforest. The ad uses excellent stop-motion to tell the story of a little girl saving the life of a leopard and telling the people of the world that it’s up to us to fix this.

Aldi Australia
Aldi Australia has partnered with BMF to bring the heart-warming original 90-second ad dubbed “The Miracle Ham”. The ad follows Beryl who, upon discovering a magical ham that can be sliced as many times as you like and it’ll never run out, sets off to gather the town into a Christmas feast, only for hilarious antics to ensue.

Pepsi
Pepsi has partnered with pop star Cardi B and Vaynermedia to deliver a dazzling rendition of a Christmas song. Opening with Cardi in her childhood, the two-minute commercial flashes forward to present Cardi blinged-up as a much more glamorous Santa. Viewers are given a look inside her glorious “Twerk Shop” as rapping elves turn diamond-encrusted Pepsi cans into cash.

Gap
Gap’s “Gift the Thought”, created by Johannes Leonardo, will strike a chord with parents everywhere. The 60-second ad shows a young boy who progresses through childhood alongside his mother with a red hoodie being a staple of all the crucial moments of his life and proves how much impact the gift can carry.

MYER
Christmas isn’t always spent at home and Myer, along with Clemenger BBDO, promotes its new interactive stockings. The 90-second ad follows Sally who goes camping on Christmas with her family and is distraught as she thinks Santa will not be able to find her. However on the night before Christmas, Sally’s in for a big surprise.

Amazon
Solomon Burke’s “Everybody Needs Somebody To Love” is used expertly in Amazon’s latest Christmas commercial, created by Lucky Generals. The ad follows the ecommerce giant's joyous boxes across multiple scenarios and characters with the main focus being on the Amazon delivery driver and cultimates in a big musical finale. Amazon are really thinking outside the box this year for their Christmas cheer.

Sainsbury’s
Sainsbury's takes you back to the Victorian era and tells the story of Nicholas the chimney sweep and the beginnings of Sainsbury’s in an emotional two and a half minute ad created by Weiden+Kennedy. Nicholas is a chimney boy who after being falsely banished shows an act of kindness and starts a Christmas tradition. With an interesting narrative and investing characters this commercial is not one to be missed.

TK Maxx
TK Maxx is encouraging Christmas shoppers to be creative and original this year with gift giving in a 60-second ad created by Weiden+Kennedy. The ad features daredevil skier TK as he skis down a mountain and takes care to avoid the same gift.