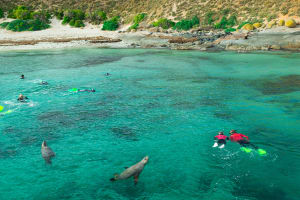 The South Australian Tourism Commission (SATC) partnered with Fairfax Media hoping to fill the 'knowledge gap' in the way tourists both domestically and internationally thought about the state.

The objective was to identify an audience that would consider travelling to South Australia, to then engage with the group and ultimately entice them to book a holiday.

SATC chief executive, Rodney Harrex, says: “We partnered with Fairfax to tell South Australia’s tourism stories in a unique way through its network of online platforms.”

SATC used audience data mined from Fairfax Media's insights team, which identified why people travel, and for what reasons people previously chose South Australia as a destination. The campaign was rolled out over a 12-month period, from 7 September 2015 through to 26 August 2016, with results finalised last week.

The research identified key insights on the behaviour of tourists and aimed to attract specific people to particular experiences year-round, at the times readers were most likely to book holidays.

Fairfax's approach was to tell a new 'story' every day so that SATC was 'always on' creating more than 200 unique South Australian themed stories. The content 'stories' were spread across native advertising ‘long reads’, e-magazines, quizzes, top 10 lists, infographics and itineraries, video and photo galleries.

The reach of the stories was amplified with Traveller.com.au which used high impact display media in the form of sponsorship, Virgin Australia Holidays was also brought in as a trade partner.

The success of the campaign was to be measured on increased awareness of South Australia as a travel destination, intention to visit and actual arrivals.

Results showed that the Fairfax-led South Australian Tourism campaign delivered on its objectives to drive brand awareness and inspire travellers, recording a 6.7 times return on the investment, Fairfax said.

As well as this, the campaign had a $10 million positive economic impact on South Australia.

From the use of Traveller.com.au and Virgin Australia holidays, the SATC witnessed a 400% increase in reader interaction with holiday deals and an 18% point rise in unaided top-of-mind brand awareness of South Australia as a travel destination.
Off the back of the results, the campaign was recognised by the Australian Marketing Institute (AMI), and won the AMI award for Marketing Excellence in the Tourism category in 2016.

“Farifax's understanding and analysis of digital behaviours have provided us with a successful, unique approach to engage prospective travellers to South Australia” says Harrex.