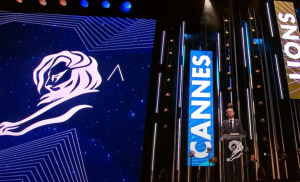 Cannes Lions announced winners in the penultimate Awards Show of the Festival.

In the Creative B2B Lions, honouring game-changing creative work in the B2B space, which displays both creativity and effectiveness in advertising products and services purchased by professionals on behalf of businesses, 415 entries were received and 14 Lions awarded by the jury: 3 Gold, 4 Silver and 6 Bronze.

The Grand Prix went to ‘Speaking in Color’, for Sherwin-Williams Coil Coatings, by Wunderman Thompson Minneapolis.

Creative B2B Lions Jury President, Paul Hirsch, President, Chief Creative Officer, Doremus, Global said: “It’s been an exciting first year for the Creative B2B Lions. Going in, nobody knew what to expect but it turns out we had quite a few contenders for the Grand Prix.

"Any one of which could have won. In the end what made the difference was the winning works’ strategy, deep understanding of its audience, and exceptional and personal brand experience. In the past, B2B has often surfed in the wake of B2C, but I have a feeling this work will flip the script and have deep B2C implications in the near future.”

In the Creative Data Lions, which honour the interplay of ideas and information, 328 entries were received and 13 Lions were awarded by the jury: 3 Gold, 3 Silver and 6 Bronze. The Grand Prix went to ‘Data Tienda’, for We Capital, by DDB Mexico, Mexico City / DDB Mexico, Ciudad de México.

From 1,488 entries received in the PR Lions, which honour strategic and creative communication, 49 Lions were awarded: 7 Gold, 17 Silver and 24 Bronze. The Grand Prix went to ‘The Breakaway: The First Ecycling Team For Prisoners’, for Decathlon, by BBDO Belgium, Molenbeek-Saint-Jean.

In the Media Lions, 1752 entries were received and 57 Lions were awarded: 9 Gold, 19 Silver and 28 Bronze. A second Grand Prix went to ‘Hope Reef’, for Mars Petcare, by AMV BBDO, London.

Media Lions Jury President, Daryl Lee, Global CEO, IPG Mediabrands, Global commented: “The Grand Prix was brilliantly amphibious in every way. It created new living media that embodied a powerful message of hope. It opened up an immersive experience that built both global scale and a deeply personal connection.

"And it’s helping to save our planet in an authentic and credible way for the brand. The jury was united in celebrating this perfect marriage of idea and technology, of message and medium, of purpose and place.”

Cannes Lions also honoured two special awards. The 2022 Cannes LionHeart was presented to girls’ education activist and Nobel Peace Prize laureate, Malala Yousafzai. The award is given to a person who has harnessed their position to make a significant and positive difference to the world around us.

The Entertainment Person of the Year, which is given in recognition of the vital role that entertainment plays in the marketing and communications landscape was presented to Ted Sarandos, co-CEO, Netflix.

The Media Network of the Year 2022 was also announced in the following rank: