BuzzFeed launches in Australia, urges advertisers to do 'advertising that sucks less' 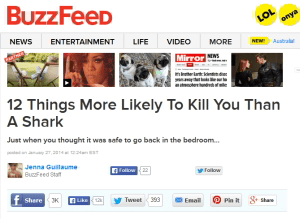 BuzzFeed's Australian site launched today with a global boss in town expecting a "snarky" local audience. But as yet there are no local brand advertisers on board to do "advertising that is more like TV advertising" and cease "tweeting boring shit".

Speaking at the IAB's seminar on native advertising in Sydney he said native was "just advertising that sucks less". "Our view is the internet is awesome, it allows people to find cool stuff to share, so why doesn't advertising do the same thing? That's where we're focusing," he said.

Wiedlin said he preferred the term 'social advertising' to native advertising but either way, brands needed to "take the Facebook test – would you share it with a friend?" If not, it won't work.

He said some clients instantly "get it", but then "someone like Dell comes along with a 30-page white paper that they want to go viral".

BuzzFeed has built a huge global audience with list-based articles along those principles. Context and timing is key, he said, suggesting that native and social advertising is the natural home for tactical advertising.

Wiedlin said that he was expecting a slightly edgier local audience. "The UK is snarkier than the US. I expect [Australia] to be off-the-rails snarky [with audiences] definitely attracted to the negative."

But he said the key to good, shareable content was "not to be mean spirited, because people don't share it".

Equally, "people do not share perverted content", he said, citing that while Scarlett Johansson's phone hack might have been a popular Google search term, "nobody was sharing [her nude pics] it because people do not want to be seen as a pervert".

Content, he said, finds its audience. Citing a native ad for Pampas, '11 Babies Who Played So Much They Tuckered Out', he said a new mum or dad will find "all those cute babies and be compelled to share them with their fellow breeders".

While some analysts have argued that native advertising isn't scaleable, Wiedlin said that the better the story is, "the more it gets shared, the lower the cost of engagement".

He said native advertising was more like TV advertising, where the creative element – the story telling - is critical, as opposed to "spamming people with banner ads".

Lastly, using the conference as his own native platform, Wiedlin also called for advertising people and creatives to get in touch. BuzzFeed Australia is hiring.