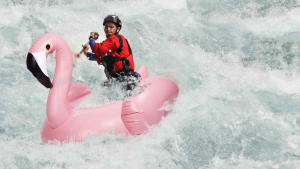 Every year brands and marketers take a stab at pulling a prank for April Fool's Day. We round up a collection of April Fool's gags that grabbed our attention.

The new experience costs $495 and allows you to explore the majesty of the Nymboida River without the constraints of ugly safety equipment, or rafts.

It's part of a whole 'raft' of new experiences from Red Balloon including V8 Parasailing, an Activewear Styling Session and of course, Name a Cloud for the legacy-hunters among us.

For the adventurous, Red Balloon is also releasing a Blindfolded Cooking Class for those who want to test their other four senses while making a meal.

Want to go overseas? Don't want to pay to leave the country. Now you can, with the launch of Contiki's latest product offering, 'Virtually Unlimited', which allows Aussie travellers to see the globe using virtual reality (VR).

Contiki are opening 10 'Virtual Experience Centres' which offer three-hour virtual trips for $149 per person, with activities including Oktoberfest in Germany, Machu Picchu in Peru and Iguazu Falls on the border between Argentina and Brazil.

Contiki MD Katrina Barry says: “One of the main benefits of our ‘Virtually Unlimited’ itineraries is that travellers get the high of travel without the investment.

“They don’t have to leave the country, don’t need to take weeks of leave and don’t have to save up for flights and accommodation, and we predict this is the way people will ‘travel’ in the future.

“All it takes is a three-hour visit to one of the 10 Contiki ‘Virtual Experience Centres’ in Sydney, Melbourne, Brisbane, Cairns, Perth, Darwin, Adelaide and Hobart.”

Industry super fund-owned bank ME has today released a new line of credit cards with no limit (that’s right, the sky’s the limit) to help you keep up with the latest fads and fashions. The only barrier is your ego.

There are four credit cards to choose from: cim, chloé, courtney and cris.

Each card in the set is vanilla scented and available in different shades of nude.

In addition to credit cards, ME is also offering the ‘canye’ debit card (no overdraw facility) to responsibly manage any outrageous spending or debt complications.

For today only Shelton will undertake the role to expose the LGBTI community's alleged plans to push the “pink propaganda”.

Star Observer noted that if circulation boosts from the stunt it will consider inviting Reverend Fred Nile or someone from the Australian Marriage Alliance to take the reins later in the year.

The future is looking grim under a Trump Presidency, but thanks to Groupon you can holiday away his entire term.

If the Republican candidate wins the election, Groupon Australia is giving one lucky family the exclusive opportunity to retreat to an island paradise and escape the world for four years.

Uber is delivering babies to your office

Concrete Playground is reporting that Uber will be delivering babies to your office today, like some sort of stork in an Audi with a 4.8 star rating.

The waiting list is expected to exceed that of UberKittens and UberPuppies.

Uber Australia CEO Pieter Rank tells Concrete Playground: If there's one thing you hear time and time again from successful, white collar types in the CBD, it's the regret of having put career ahead of family. Today at least, even if only for 15 minutes, we're giving them the chance to have both — no strings attached."

Gelato Messina has announced it has been impacted by the NSW Government's 'Lock Out Laws' and its Surry Hills and Darlinghurst stores will no longer be able to trade past 7pm.

It notes that the current lock-out laws on Sydney's venues have resulted in an increase in foot traffic to its inner city stores as consumer seek alternative late-night entertainment.

As a result of "frequent antisocial behaviour" near its stores, Messina will have restricted trade.

It also noted that all other stores will operate as normal, and with its shop at The Star being granted an exemption for late night trade.

Burrito preference can say a lot about a person. And now you can find your perfect match thanks to technology-driven dating company Zoosk which has launched Burrit-OH!, the app that matches singles based on burrito compatibility.

Burrit-OH! uses a 32 Ingredients framework to calculate your perfect match and help daters connect on a deeper level.

In a revolutionary feat of engineering, Krispy Kreme has launched the 3Doughnut Printer.

It allows consumers to 3D print their own little moments of delectable joy at just the touch of a button.

With an RRP of $8,990, the Krispy Kreme 3Doughnut Printer is definitely a big ticket item for early adopters and ultimate fans of the humble doughnut.

Never again will you have to wait to get to a restaurant to discover the perfect dish, with OpenTable's new app functionality, OpenTable Taste, allowing diners to sample food by licking their phone or tablet.

Using 4D technology, OpenTable makes it easier for diners to test a restaurant before they arrive. It also means that diners adhering to special diets can taste anything they want, guilt-free.

OpenTable's senior vice president of marketing, Scott Jampol, says the new technology is a natural extension of its service.

“OpenTable is committed to helping diners and restaurants around the globe connect in new and exciting ways,” Jampol says.

Australian PR agency Access has launched a content division called Cute on Call, offering a range of adorable puppies, kittens, babies and bunnies to hire for promotions and original content.

In a clever twist, a selection of ugly babies will also be available.

“Not-so-pretty babies are quite funny and, used properly, can attract a lot of attention. We call them ‘quirky bubs’ to avoid offending any overly sensitive parents,” said Access CEO Andrea Kerekes.

“For any brand wanting to engage mass audiences online or in face-to-face activations and promotions, having something young and cute – maybe not so cute – has become virtually mandatory.

Access has teamed up with a network of dog, cat and miniature rabbit breeders, and has signed agreements with Australian-based mummy bloggers to access a range of babies.

Did you know there are 1810 billionaires in the world? I bet you didn't. It's because no one is willing to stand up for these under-represented people.

Are you up to the challenge? So far Oaktree has raised more than $51 billion for the cause, find out how you can partake here.

The creators behind 'Bottled Instinct' decided that they wanted to capture the essence of a woman ('her charm, her sensuality, her passion… her taste, feel her smell... her voice') and turn it into a drink.

The Order of Yoni's website reads: "The secret of the beer lies in her vagina.

"Using hi-tech of microbiology, we isolate, examine and prepare lactic acid bacteria from vagina of a unique woman.

"The bacteria, lactobacillus, transfer woman’s features, allure, grace, glamour, and her instincts into beers and other products, turning them into dance with lovely goddess."

Still confused? Watch the video below.

This could be the last Easter with real chocolate as the global shortage of cocoa beans and stronger demand is lifting prices, with a new forecast expecting supplies to run dry by the end of 2016. So finder.com.au has launched a chocolate bar comparison site.

Finder.com.au content marketing manager Jake Quade says: "The world has almost run out of chocolate, or so a very convincing news piece leads us to believe. Comparison site finder.com.au simultaneously launched a chocolate bar comparison, so you can find out which chocolates have the most cocoa in them – and will subsequently be worth more.

Don't gorge into that last Easter egg just yet, you could be sitting on a goldmine".

Using the latest personality profiling techniques, the university discovered that Nissan drivers were also the most generous, loyal and friendly among a cross-section of European car owners.

Jetstar announces the airline will introduce Singlish as an official language on its flights departing Singapore’s Changi airport.

Singlish is colloquial Singaporean English and the language change would see Jetstar's entire safety announcement changed including "Make sure your seatbelt kiap tight tight” and “Put your barang barang under the chair”.

While the April Fool’s Day joke was intended to be a prank, some may consider it culturally insensitive. Watch the video below and let us know what you think.

Airtasker has tackled this hard question, and has launched Dogtasker. Airtasker says it saw huge opportunity to utilise an untapped labour market that makes getting tasks done easier, and more accessible. That’s why its enabling dogs to help their neighbours like never before.

In Australia, dogs are the most common pet with 39% of households owning a dog. There are estimated to be 4.2 million pet dogs in Australia; that’s 19 dogs for every 100 people.