Brands and media companies show their support for Yes vote 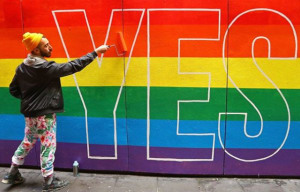 It's a rainbow explosion around Australia as the Yes supporters celebrate victory after 7.8 million people voted in favour of having same-sex marriage legalised with many media companies also marking the historic moment.

The ASB revealed that Australians voted 61.6% in favour of same sex marriage, while 38.4% voted No.

The results are in at 10am AEDT this morning! If you can't get to a telly, you can access our broadcast on ABC News Periscope and Facebook, as well as on ABC News Channel #SSM https://t.co/rilrPArMaT

The news is dominating the main news slot on all major news outlets, including ABC, SBS, smh.com.au, Guardian Pedestrian, Junkee, BuzzFeed and nine.com.au.

News Corp's news.com.au has dedicated the top MREC on its site, usually reserved for advertisers, to a banner encouraging Australians to post their congratulations.

News.com.au has dedicated the top MREC on its site

News sites are likely to see huge spikes in their traffic in the next Nielsen report for November due to the event. Junkee Media has its best month ever in August, which was partly fueled by its same-sex marriage coverage.

The publication will be on sale from tomorrow, and follows the brand’s ‘I Do’ campaign in 2012 – a petition signed by 170,000 readers.

Australia said YES! To celebrate, marie claire has produced a limited edition collector's cover which will be available to purchase from select newsagents. #LoveIsLove pic.twitter.com/NQomweipga

On Kiis 1065, Kyle and Jackie O stayed on air till after the Yes vote was announced at 10am. Usually the top radio duo finish their breakfast show at 9am.

Kyle and Jackie O have launched a competition on their show offering callers who call during tomorrow’s breakfast a ‘Free Gay Wedding’.

TOMORROW every caller that makes it to air gets a FREE WEDDING, from Kyle and Jackie O! Venue provided by #hostcosydney and #gardensonforest, rings provided by https://t.co/67SuTuBuae and ceremony by https://t.co/1YnpsQiRHP 🌈🌈🌈🌈🌈🌈🌈🌈🌈🌈 pic.twitter.com/Uuryrgxj1L

Twitter peaked at 3,853 Tweets per minute with the heatmap below showing how Australians all across the nation Tweeted about marriage equality following the result.

Dozens of other brands and companies have showed their support on social media, from Mamamia and Qantas to Airbnb.

Thank you to the millions of people across the country who took a stand for acceptance and championed the need for equal marriage rights for all Australians. Today we showed that our collective voices can help create change. #MarriageEquality pic.twitter.com/OoxOq8OzGX

Here at Qantas, we are proud to support Australian Marriage Equality 🏳️‍🌈🏳️‍🌈🏳️‍🌈 pic.twitter.com/JtyZ3csicH

Some brands used the momentum to push their own agenda, which was quickly called out on social media for their “shameless” use of same-sex marriage.

Following the Yes ruling, The Marriage Alliance has accused the Australian media of a "huge bias" and told supporters it will fight against the reforms.