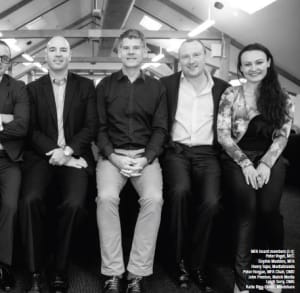 Some of the most ferocious competitors in the media and marketing industry have called a truce – kind of. Faced with huge challenges in managing paid, owned and earned media, a stack of emerging competitors, demands for broadening talent and skillsets, and automation and procurement pressures, the Media Federation of Australia (MFA) has taken a hard look at itself under a new regime led by former Unilever and Mondelez media director, Sophie Madden. Paul McIntyre sat down with some MFA board directors to gauge whether the industry can really deal with its rogues, act more strategically and take on other firms already eating lunch with the C-suite.

AdNews: Peter Horgan, what’s behind the makeover at the all new MFA?

Peter Horgan: As a body we were getting drawn into a lot of disparate initiatives that were diluting our efforts for the common good of the members. We’ve decided to focus on three core pillars around people – attracting the best talent and retaining that talent; process – collectively working to invest in automation which will benefit the industry; and performance – promoting the good that media agencies can do for driving clients’ businesses beyond just transacting their paid media activity. So, fewer things done better. We’ve also restructured the board so that the board constituency is made up from the principles of those agencies who are able to actually make calls, make things happen within our own communities.

AdNews: So how does that work at an industry level? We’ve got a bunch of different agencies here.

John Preston: …[it’s partly] about how we can actually promote ourselves to the C-suite in the marketplace rather than just at the CMO level. They’re all things that we grapple with individually and collectively we can actually conquer.

AdNews: Katie, how do you think the media agency sector is perceived by outsiders looking in? Are there some challenges there? By outsiders I mean clients and those in the broader C-suite, the people that matter to you.

Katie Rigg-Smith: There’s a really broad spectrum, which is part of what we’re trying to fix. From one end, clients really value what we’re doing. We’re more consultative. We’re seen as a lead business partner. At another end, we’re very transactional and we’re just seen as a service – a means to an end to transact media. The thing for us with the landscape and the way it’s changed is that what you come back to is still the same need. Clients want to get their brands to interact with people and they want to use media as a conduit for that. We’re not just transactional. We all have a point of view on what those channels should be. We have a point of view on how the owned, earned and paid will work together and that’s the area that we need to bring our thought leadership to bear so that it doesn’t just become a transactional relationship.
That’s where as a board, we’re really trying to up our game and make sure that clients, particularly the C-suite, see the impact of every dollar they spend in media has a direct impact on their business. The new media options we have today are more about a conversation, an engagement. And really there’s a balance in evolving what we do and how we get our plans to utilise these different platforms in a more efficient way.

AdNews: How problematic is the transactional perception of the industry?

Henry Tajer: I think there are some issues that are heritage issues that we as an industry are probably best to come together to resolve. Any one agency within the industry trying to resolve that for the whole is nigh impossible. So the steps we’ve made and the progress we’ve made in automation and industry-wide infrastructure, I think has been hugely impressive and will result in a much more streamlined industry not just for the agencies but also for – at least in the first pass – the television players in the marketplace who are on board as well.
But really, a lot of what we’re talking about, whether transaction or whether strategic, speaks to the MFA coming together to strengthen the marketplace. And in a stronger market, the operators in the market, agencies, media organisations and clients, most importantly, are in a much better position to re-leverage the investment they make in their marketing spend and that’s ultimately what fuels all of their businesses and that’s part of the performance piece that Pete mentioned in one of the key three areas of focus.

John Preston: Fundamentally, we’ve got very manually driven businesses. So if we can all think about how to make that much more efficient and effective, it’s better for all.

AdNews: But the MFA has been working on an industry-wide automation process for two or three years now?

Peter Horgan: It’s three years. Again, it’s a big initiative and trying to get all stakeholders, including media vendors, on to the same page, where they’re acutely sensitive to the impact such automation may have on their yield positions, is one of coaxing. So, we’re very close now to moving to the RFP stage and it will be a big change for the industry. First of all in the TV space where just the amount of individual transactions are totally unsustainable.

John Preston: Maybe it’s a blessing that’s taken that long because, with the way technology has moved, what we might have ended up with three years ago might be completely redundant now. It’s probably worked out well.

AdNews: So next year we will see something in the market?

Peter Horgan: It will be rolled out in stages but a large part of what is manual, line-by-line transacted will enjoy far greater automation. More broadly, we operate in an incredibly competitive landscape. We’ll all go back to our individual factories and plot out how to annihilate each other and it’s not just within our own ecosystem. Everyone is converging on each other’s businesses. You have management consultants wanting to get into our space. You have accountancy firms wanting to get into our space and then there’s creative agencies as well. So, everyone is converging on each other’s business.

AdNews: And the tech players too.

Peter Horgan: It’s absolutely true. And unless we’re working to attract the smartest, brightest and best to our business, we’re going to get squeezed.

AdNews: Historically, media agencies have been about paid media. That’s changing quite dramatically. How big an issue is it for the industry?

Leigh Terry: Look, I think it links into the perception question you asked Katie earlier on. Yes, media agencies have largely transacted with media vendors for paid space with their 30-second spot or a full-page print ad.
Owned assets have been around for hell of a long time. So, again, I think part of our challenge and partly our response to the perception challenge is that media agencies haven’t just been about paid media but increasingly what we talk about with owned and earned absolutely is in aspect. And owned is about data as much as it is about physical assets. Pete mentioned earlier about tech companies moving more into our space. The battle for analytics and who has what data, be it campaign data, be it client data, be it client databases. There’s a lot more potential partners that clients can play with in that space but we believe as an industry at the absolute centre of clients’ marketing investments that we’re very well placed to move more into that area and have done.

Peter Vogel: Owned assets have been around forever. I think earned media has also been around forever. I mean, always in all our research, personal peer recommendation has been the strongest driver of effect. And I think that technology has enabled owned and earned assets to be more scalable in the way that you use them and I think that plays fantastically into the media industry’s real strength. Because we have always invested in research, into data and how consumers behave and I think that’s the position we’re in to help our clients in the areas of owned and earned. But certainly, that is why we’re developing as an industry a lot of the technologies to ensure that we know what works and what doesn’t and to manage the proliferating choice that we have.

Katie Rigg-Smith: It’s also because holistically, it’s the relationship between paid, owned and earned. And so if we only look at one of those silos then we’re not giving earned or owned as a full picture to clients. So that’s why as an industry, we are excited. But those three things have a relationship. Some clients don’t need as much paid and they’ve got amazing earned already. Other clients, they need a lot more paid to generate any owned or earned. That has to be a relationship you unpick and that you use the data to actually inform. That’s why we’re excited.

John Preston: And I think the role of the MFA is to take a view of the holistic opportunity that media are well positioned to offer – that comprehensive view of the customer journey from the first conversation right to the transaction. And we’re one of the few businesses in the marketplace that actually has a perspective on that. [Others out there] might come in with a little niche view, but it’s not the holistic view.

AdNews: What about talent and skill sets for this new world? How many people have to go?

Leigh Terry: Everybody needs to be re-skilled because if what you’re doing now is what you were doing five years ago, you’re no longer as valuable to an organisation as you once were.

John Preston: It’s perhaps less about replacing and more about reframing and educating because we need the tenure of senior people in this business. I’m talking like an old fart with grey hair here but you’ve just got to adapt and allow the information through that they need to adapt.

Agency rogues and rascals
Watch Henry Tajer and Peter Horgan debate media agency rogues and why corporate procurement is finally getting the “cheap is not best” argument. Download the Viewa app, hover over this page and watch with delight.