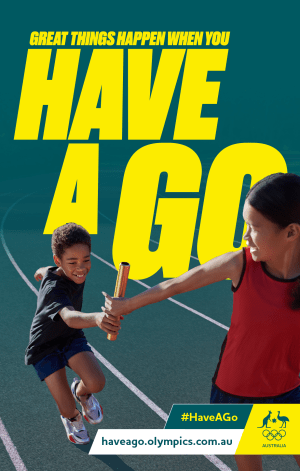 As the world’s athletes prepare to gather in Tokyo in a month for the Opening Ceremony of the Tokyo Olympic Games, the Australian Olympic Committee (AOC) is launching a campaign, Have a Go, letting Australians know that, ‘Great things happen when you Have a Go’.

The campaign was developed by AOC partner M&C Saatchi Sport & Entertainment, and will run through the duration of the games featured by AOC's media partners JCDecaux, NewsCorp and Channel 7.

Have A Go is based on the insight that Aussies punch above our weight in sport and defy the odds. It’s in our DNA.

Not everyone’s journey to the Olympics was a path of glory. Some athletes never made their high school teams, some weren’t instant stars in their sport, but they tried harder, they kept turning up and had a go.

"We want to excite Australians about the upcoming Olympic Games and celebrate one of Australia’s largest passions in sport. When watching the Tokyo Games, we want Australian’s of all ages to be inspired and think about getting back into sport or take up something new and Have A Go!”

AOC CEO Matt Carroll says the campaign plays an important role for the health of the nation.

“We have loved working with M&C Sport & Entertainment on developing this campaign as Having a Go is where it starts, and this is crucial for the development of our nation," Carroll says.

“Increasing participation and ‘Have A Go’ is about more than growing Olympic sport, it’s about bringing communities together, creating vital connections and being inclusive, this is something that deserves real celebration."