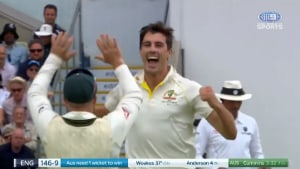 Australia's game one win at The Ashes and the second episode of The Block for 2019, has led Nine to another massive network win overnight.

Last ngiht, the Australian Test side completed its comeback victory over the English, as they were all bowled out shortly after lunch on the fifth day.

The coverage led multichannel 9Gem to have a higher audience share than the network's main channel, with 9Gem taking a 17% share, compared to Nine's 19.2%.

Over on the main channel, Nine continued to lead in primetime, with The Block's second episode for 2019 drawing in 859,000 metro viewers.

Ten's Australian Survivor came in second with 713,000 metro viewers, as Seven's Australia's Got Talent slid to 688,000 after breaking the 800,000 viewer mark on Sunday Night.

While Seven won the overnight main channel battle, taking a 17.6% share, it was unable to match Nine in the network race, with the combined efforts of its main channel and 9Gem giving it a total network share of 37.8%.

Seven came in second for its network audience share, with 24.7%, while Ten came in third with 16.8%.

The Block and Australian Survivor return in primetime, while Seven will air Dogs Behaving (Very) Badly. The second game of The Ashes series will commence on August 14.