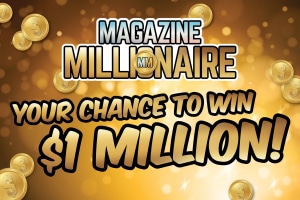 Are Media has launched its biggest consumer competition, giving readers the chance to play for one million dollars.

The Magazine Millionaire competition, which runs over six months, gives readers who collect 20 tokens from the purchase of any Are Media magazines sold at newsagencies and supermarkets across Australia the chance to win the top prize.

The competition is being supported with a million dollar marketing campaign, including point-of-sale in retail environments, coverage across Are Media’s highest selling weekly and puzzle titles and Are Media’s digital platforms, radio ads on Nova and Smooth, and a TV ad running on Channel Seven.

“Our portfolio of magazines are loved across the country and now we are rewarding those who buy them with the chance to play and win a million dollars and be in the running for instant cash prizes,” says Are Media marketing director Louise Cankett.

“This is the biggest competition we have ever launched and demonstrates our ongoing support for the newsagencies and supermarkets across the country which are the primary gateway for our readers to access and enjoy our compelling magazine content.”

The winning entrant’s game to play for a million will also be shown on Seven’s The Morning Show.

Magazine shoppers can enter multiple times with all complete entries going into the draw. One shopper will be in contention to play for a million dollars, with a guarantee of taking home $10,000. In addition there is an opportunity to win $100 instantly each day.