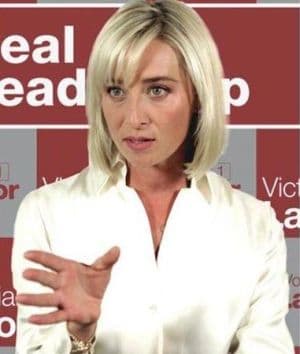 Social media platforms Facebook and Twitter are falling over themselves to demonstrate the power of their platforms alongside traditional TV as a way for advertisers and networks to boost engagement with audiences. Channel Ten this week launched its second TV drama designed to tap into digital channels and social media throughout the series to drive the plot, give fans additional access and boost ratings, but are audiences interested?

As far as social media activity goes Party Tricks has a long way to go to match the social interactions of reality shows like such as Big Brother, which is about 15-times more popular with the online masses if the early numbers are any indication.
The social-first political drama is being supported by an interactive online experience that gives audiences the chance to exchange live messages with the political candidates and follow their election campaigns online.

The two main characters also have Twitter accounts @KateBallardMP and @DavidMcLeod, with exclusive videos to be posted by the pair as the series heats up.

There will be also live questions and answers with each of the candidates as the in-show election draws closer.

Network Ten previously teamed up with Zeebox (now Beamly) to offer fans a second screen experience during its broadcast of Secrets and Lies, the first drama in developed with in-built social activity. This time around additional content is hosted on Ten's own digital channel.

The pair tracked both mentions of the phrase 'party tricks' and the two in-character accounts from the hour before the show to one hour after the show.

However, Woodford told AdNews that the data did not include tweets without the key phrase in it. For example, a tweet saying “Asher Keddie is great in this” would not have shown up in the pair's data.

The pair concluded that there were 1490 tweets during the period, with peak activity hitting 27 tweets per minute.
While Party Tricks may have been pitched as a social-media savvy program engaging the twittersphere, fans of Big Brother were nearly 15-times more active on Twitter during the season premiere of Big Brother, hitting a peak of 397 times per minute.

However this doesn't mean that Party Tricks was a fail, far from it, Online Circle Digital's product development manager Fernando Tinoco suggested to AdNews.

“It certainly wasn't a frenzy, but I don't think you can call it a fail,” he said.

Tinoco was also paying close attention to the fortunes of Party Tricks on Twitter, saying Party Tricks got 75 mentions during a four-hour window on the night.

However, trying to compare shows is something like trying to compare chalk and cheese, according to Tinoco.
“I think Big Brother has had a following for years, so they're account is up to 15,000 followers so they will be able to leverage that a lot faster,” he said.

Party Tricks managed to trend at number two nationally for the evening, which Tinoco said was a promising start, but the real proof in the pudding would come in the coming weeks.

“I think for Party Tricks I think they're trying to generate conversation and hope that drives people to the show ... it will be interesting to see how it does on TenPlay over the coming days.

“If the audience continues to grow, then job done.”

Meanwhile both Network Ten and Twitter Australia were optimistic about the show's performance on social media, but were unable to supply any numbers to AdNews.

Network Ten however did point out that Party Tricks was its best-performing show in the timeslot since 2011.