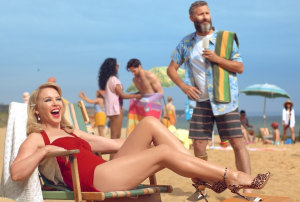 Dr ANDREW HUGHES, a lecturer in marketing in the Research School of Management at the ANU, analyses the latest in promoting Australia as a tourist destination.

Tourism Australia’s latest offering from the Philausophy campaign, Matesong, ended 2019 and starts 2020 with parts of tourism advertising in Australia seemingly stuck in a time warp. It’s as though everyone looks at the truly sensational Hoges campaign from the 1980s and says, yes, let’s replicate that. After all it worked for them, it should work for us.

And just look at how many things from with an '80s heritage or theme are now successful – from Star Wars to Stranger Things. Even Kylie, the most successful solo female Australian artist of all time, is still smashing it.

So why not just do the same thing Hoges campaign did. It’s as easy as copy, paste, edit and update. And there is even a checklist to follow. Outback scenes? Check. Iconic Sydney landmarks such as the Bridge or Opera House? Check. Sandy beach with only beautiful people on it and blue skies overhead? Check. An Australian celebrity spruiking their Aussie accent? Check. Aussie backing track or song? Check. Now edit scenes together and hit play. Instant success. Even quicker than 2 minute noodles right?

But wait...isn't it 2020. We’ve now got social media, timelines, feeds, omni channels, multiple devices, short attention spans, and way, way, too much dependency on first world lifestyles. Not to mention this is the era of storytelling, natural, honest and authentic tales which capture and enthrall. Generation Y who were willing to watch all the Harry Potter movies after first reading all the books, or the Twilight trilogy, or the Lord of the Rings, or...and the list goes on.

The fact that cinema still exists, that 2 hour plus movies are still a thing, demonstrates our desire for a damn good story remains undiminished in the harsh white glare of the 2020s LCD screens.

And it’s not as though the new desire to be told a story is an unknown either in tourism land. The Dundee 2 trailer was brilliant, even spawning a crowdfund campaign to make it a reality, or the Human Brochure campaign done for Canberra in 2014, or for an international example, the great Lufthansa campaign, #LifeChangingStories, such as this piece starring Chris Burkard, shows how tourism needs to be done in 2020.

Even outside tourism one of the most successful campaigns ever seen in Australia, the late Neil Lawrence’s Our Story for the mining industry which stopped Labor’s MRRT, saving the industry hundreds of millions, was already proof of the power of a story. Even the website was called thisisourstory.com.au

And we, as consumers, want to create and make our own stories when we experience a place and space. This is the very reason why Instagram was created and the very reason why it’s the go-to social media platform for so many when it comes to sharing our experiences when we travel. Just ask Tourism Tasmania about the issues of being overly popular on Instagram.
Yet this latest offering from Tourism Australia seems not to have a story. Nothing to share on Instagram. Or any other social media platform really. Least not in a positive way.

This ad is a bit like the old mate campaign done for Tourism South Australia. It’s not sure who exactly it is targeting, or what it wants the viewer to do. Is it awareness? Is it creating interest in Australia? Or does it want the viewer to get on a plane and experience some good ol’ fashioned mateship in the midst of one of the worst events to hit the eastern seaboard in living memory? Or is it laughing along with the puns in the song?

Who knows really. It’s a mystery that belongs on the X Files. Then there is the length of time. Yes it is a song but it is first and foremost an ad, and one that kicks out to 190 seconds, so it needs to be relevant every second to the target market to keep them engaged and watching in the era when most of us can’t look at a single Instagram image for more than a few seconds. Again context. Know, and understand, your target market. From their perspective not yours.

Yes the target market was the UK, and yes there are many who watch the Christmas ads which kick out to up to 2 minutes, but you still need to make them engaging, shareable, such as this one by IKEA with a very chilled soundtrack, and an experience which enables the objectives of the campaign to be met. See if the kids don’t sing that IKEA song around the house.

And some of the most effective Australian tourism comms are songs about Australia, sung by countless generations of Australia, such as Down Under by Men At Work (nod to Vegemite), Peter Allen’s I Still Call Australia Home (think QANTAS), or Icehouse’s Great Southern Land. For a NZ perspective the Good Morning World campaign probably does what Matesong was trying to do, the conveying of sharing culture, place and space to create a more intimate experience for a visitor.

So it can work as a strategy. It just isn’t working here because Matesong isn’t sure if this is a comedy piece, serious piece, or tourism ad. Kylie undoubtedly saves the entire thing from becoming a nightmare before Christmas, but even here running it in its full length before Sky News in the UK bulletin which led with stories about the horrendous fires in Australia was yet another example when it came to this ad that it was one with no mates to help it succeed.

Australia as a nation, culture and people has so many great stories to share with the world. It is about time we stop using checklists and start sharing our stories so people who do visit help tell our story through sharing theirs.