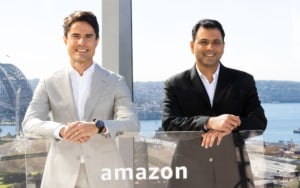 Amazon is calling 2021 a “game changing” year for its Prime Video service with a string of new local Originals revealed as the platform seeks to boost its Australian subscribers.

The streaming platform announced last week that it will be producing seven new original series, including a mix of scripted and unscripted dramas. This includes two sport docuseries; Head Above Water, which follows elite Australian swimmers, and Warriors On The Field, which is presented by former AFL champion Michael O’Loughlin.

Additionally, Amazon will also broadcast the Australian Swimming Trials later this year, and has also released other sport docuseries including Making Their Mark.

“We know how sport crazy Aussies are,” Kharas says.

“They're the highest number of active participants of sport per capita that we’ve seen of any country so it’s obviously a massive focus area for us.

“We’ve seen really strong early success with the Test and then Making their Mark. There's an appetite for docuseries based on really popular sporting teams so live sport was the logical next step. With swimming we thought there was an underserved audience, there was an opportunity for us to make a difference, for us to bring something new to the broadcast, to distribution, and we took it.

“We're simultaneously evaluating a bunch of other opportunities. When the opportunity is right, when the numbers make sense and we can provide something valuable to our customers, we will do it.”

However, Kharas isn’t concerned about Australians’ willingness to pay for another subscription service, saying that Amazon Prime has more to offer customers.

“There’s an opportunity for us to convince consumers that Prime is worth the $7 a month or $60 a year that you have to pay for it,” he says.

“Obviously our Originals and exclusives lineup is always growing and it's always increasing in value, but we also have a vast variety of licensed content.

“And then Prime is not just about Prime Video, there's a huge amount of benefits associated with it including shipping, music, Twitch, and reading.

“So Amazon Prime provides massive value to customers and it’s our job to educate customers about that and show them what the value is and then it's up to them to make that decision.”