Ad fumbles and placement conflicts – is there an answer? 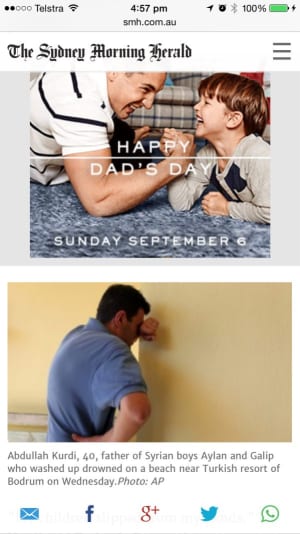 Screenshot of the ad placement on the SMH's mobile site.

Over the Father's Day weekend, following the “very unfortunate” ad placement involving Fairfax Media's Sydney Morning Herald and Myer, we ask whether such ad slips can really be avoided, if the ad tech in place is good enough, and what can the industry do to avoid such situations?

For those that missed it, the publication came under fire for running a Father's Day ad for Myer, which appeared in a story about the father who lost both of his sons when a boat carrying asylum seekers sunk off the coast of Turkey.

It made for a bad ad placement to say the least – something a Fairfax spokesperson said “was of course very unfortunate”. Many took to social media to highlight the gaff.

Since the mishap, speaking to AdNews, a Myer spokesperson said: “We work closely with our media partners to ensure the appropriate placement of our advertisements.

“While we are obviously not able to control the final positioning of online advertisements, it is very unfortunate when instances like this occur.”

IAB CEO Alice Manners said the reality is that to maintain editorial integrity, publishers like to keep their commercial operations independent from editorial operations – as such they then rely on processes and procedures to manage contextual placement conflicts, “but unfortunately sometimes that’s still not enough”, Manners said.

“Looking to the future – and even the short term – advertising technology will be the solution to addressing contextual placement conflicts,” she said.

“Australian publishers are already testing and trialling the options available including technologies such as Proximic, which was recently acquired by comScore. There is still work to be done to ready the technology for the Australian market addressing the constraints around scale and volume, but I’m confident that as an industry we will solve this issue sooner rather than later.”

While stories can be tagged or marked violent, it's not as easy to categorise all news items. Could some ad tech tools that 'scan' content ever predict this? Is it more of a case that if it's marked 'violent' the advertiser needs to then make some manual selections? Or should Myer simply stipulate it does not want to be next to anything violent?

CEO of brand verification platform Integral Ad Science, Stephen Dolan, said there are tools that deal with this issue in real time and have been around for more than five years, but are relatively new to the Australian market.

But in reality can technology ever do this? Or can only a human read between the lines?

He said “there is absolutely a solution” as blocks can happen in real time should the content be deemed an undesirable match to the clients marketing message, ands that tech can scan the content for the advertiser before making a decision to let the ad appear on the page based on the clients brand safety settings.

“It's difficult to answer your question directly, but the ad was very family orientated and there are safeguards marketers can put in place at the start of the campaign to mitigate this kind of scenario.

“We rate each content category using a score of one to 1000. anything above 750 would be considered very clean content - the client can specify a different score for each of our seven categories and the threshold for each may be different depending on the brand or campaign.”

He said the agency and client don't need a crystal ball to predict breaking stories of a violent nature or provide a laundry list of the kind of content they feel is inappropriate.

“The brand safety tech will apply the clients' brand safety thresholds before each ad is delivered. Content like this and references to words like "killed", "abducted" will be scored low for violence and may be blocked if the client's threshold is higher than the score for the page.

“We don't judge content, this story might have been a good fit for other advertisers but clearly not this one. Our goal is to give clients more control and provide them with the tools to choose the optimum environment to market and sell.”

In terms of the prevailing issues, Dolan said there is a broad assumption by the industry that the "premium" sites are always going to be brand safe, however, he said depending the mix of content, brand and message, this might not always be true.

“Some advertisers like to have additional controls on what content there ad is displayed even outside programmatic,” he said.

Another issue is that some publishers will not accept blocking tags as they are concerned with the missed revenue opportunity and aesthetics of the page if a blank ad is served.”

GroupM director of technical operations Timothy Whitfield, who is also on the IAB Brand Safety council of Australia, said naturally, the news needs to report of these types of events as we, the public, need to stay informed – but with these stories often come horrific imagery and equally terrifying concepts.

“Unfortunately, it’s very difficult for programmatic digital technology to semantically categorise these types of events. Current technology looks for illegal download, offensive language, hate speech, violence, illegal drugs, adult content. Note that none of these filters would have been triggered for this article.”

CEO of Atomic 212, Jason Dooris, said historically we come from a time when we we weren't upsetting people with such content and ad/editorial placements, so if we weren't doing it then, we shouldn't be upsetting people now. He said while software has improved, it just isn't sophisticated enough to prevent things such as the Myer and SMH situation.

"If you sat at your PC for 24 hours throughout the day you would see many examples of advertising and editorial that in that context could be deemed inappropriate by a reader.

"You could argue that due to the new new tech developments that we would be smarter these days, but the algorithms aren't there and really, a sizable investment in an algorithm is needed to come up with the right solution."