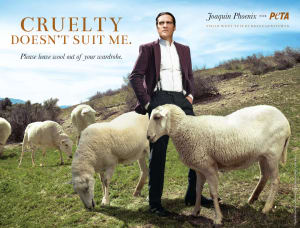 A People for the Ethical Treatment of Animals (PETA) billboard has been deemed too controversial for its Australian debut in Armidale, New South Wales.

The ad, which recently turned heads at a busy Los Angeles intersection, is from the animal rights organisation and features Joaquin Phoenix and a flock of rescued sheep.

The ad was rejected by an ad company, which AdNews understands to be OohMedia, on the grounds that it's likely to offend residents in the northern NSW town of Armidale - cattle and sheep farming country.

In the ad, the actor wears a vegan wool suit and states: "Cruelty Doesn't Suit Me. Please Leave Wool Out of Your Wardrobe".

PETA says Phoenix agreed to front the campaign after watching footage of sheep being abused in Australian shearing sheds.

A PETA spokesperson tells AdNews that it is still on the hunt for a media owner who will run the ad and it's not giving up.

PETA associate director of campaigns Ashley Fruno says: “What's offensive is kicking and punching gentle sheep and standing on their necks in order to produce woollen sweaters and suits.

PETA says in a landmark case in 2016, a shearer pleaded guilty to four counts of cruelty to animals. The man was charged and soon followed the release of an international exposé that documented that Australian wool workers beat scared sheep in the face with electric clippers and punched and stamped on their heads and necks. Five other shearers were charged and are scheduled to face court this year.

Did you see this? Last month a crowd-funding effort to reinstate an Australia Day billboard featuring two young girls in hijabs raised more than $130,000.