ABC in, Ten out as A-League appoints new free-to-air partner 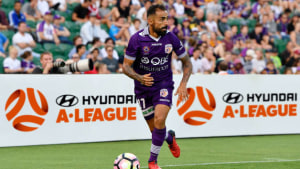 The Hyundai A-League has struck a deal with the ABC for its upcoming 2019/20 season, making it the official free-to-air broadcaster for the football league.

Current pay-TV partner Fox Sports will continue to broadcast all games from the competition, while the ABC, under the new two-year deal, will air 29 live matches on Saturday's throughout the season.

For the A-League 2020 Finals Series, delayed broadcasts of one Elimination Final, one Semi-Final and the Hyundai A-League 2020 Grand Final, will also air on ABC.

This will be the first time that the Hyundai A-League will be broadcast on the ABC and also marks a return of the Westfield W-League to the network after being the inaugural broadcast partner of the competition from 2008 to 2017.

The new deal marks the end of the A-League's commercial broadcast arrangement with Network Ten. The network had held the Saturday night rights since 2017.

It was originally believed that Ten would look to keep the rights to the competition as it faces a shrinking sports offering, with chief sales officer Rod Prosser previously telling AdNews Ten would only be interested in the "right deal" that made sense for ratings and revenue.

The league has struggled with diminishing audiences in recent years, as some games began to fall below 100,000 viewers, while attendance has also taken a hit.

The ABC will also broadcast every Caltex Socceroos match to which Fox Sports, on Foxtel carries rights. The network will also air upcoming international friendlies for the Westfield Matildas.

An outline of how the new deal with work

“To have the Hyundai A-League and Westfield W-League on a primary free-to-air network is an important evolution in the execution of our broadcast strategy and extends the power and impact of our Fox Sports partnership," Australian Professional Football Clubs Association chair Paul Lederer says.

"The ABC’s television, radio, digital and social platforms will allow the Australian professional game to access and engage even more fans through more touchpoints.

“The nature of the agreement and the negotiations leading to it are testament to the benefits that exist for all of the parties involved."

The ABC’s director of regional and local, Judith Whelan, says the agreement to screen A-League, W-League, Socceroo and Matildas games was significant for the ABC and would form the "cornerstone" of the corporation’s sports coverage over the next two years.

“The ABC has unrivalled reach into every corner of Australia, and we will be using that reach to help build the profile of football. We plan to use all our platforms to drive audiences to our coverage on ABC TV," she says.

The future of the A-League also remains in the balance following the league's decision earlier this year that it would seek independence from governing body the Football Federation Australia (FFA) and operate as its own organisation.

Subsequently, current FFA boss David Gallop announced he will exit the organisation at the end of the year.

The deal will not impact the current partnership between Telstra and the league, which has the live mobile rights for the A-League, W-League, and all national team and FFA Cup clashes.