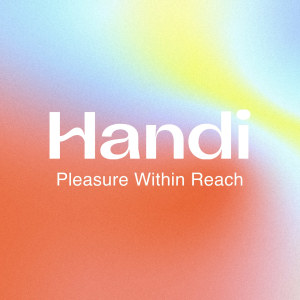 Brand and innovation strategist Heather Morrison and her brother, disability awareness consultant and activist Andrew Gurza, are breaking down taboos on sex and disability with the launch of new inclusive sex toy brand Handi.

The first brand of its kind, the idea for Handi came to life after Gurza, who has cerebral palsy and identifies as a queer male, released a documentary sharing some of his frustrations on dating with a disability.

Speaking to her brother in further details about it, Morrison soon discovered that self pleasure was a huge issue for people living with a disability.

“I hadn't ever thought of a lot of people having disabilities, have issues with their hands and therefore they can't self pleasure,” Morrison says.

According to the World Health Organisation, sexual pleasure is a human right with a whole host of health benefits for mental, physical and societal wellbeing.

For Gurza and others living with disabilities, access to this human right is limited and not an entirely freeing experience.

The alternatives available are asking a care worker for help, paying someone to do it or going without it entirely.

Combining strategist thinking with firsthand experience, the duo did some research and found a huge gap in the market and thus Handi was born.

“Over 50% of disabled people that we surveyed, had a lot of difficulty self-pleasuring,” Morrison says.

“Most of it was related to hand issues and dexterity. So, that really seemed to be the biggest barrier and whether or not you could self pleasure. 92% of everyone we talked to, wanted a toy that was designed for them.”

Working with a team of biomedical engineers, occupational therapists and industrial designers at RMIT University in Melbourne, led by Dr Judith Glover, the brand currently has four prototypes being tested with plans to launch it in 2021.

It has also been accepted into the 2020 cohort of the Remarkable Tech Accelerator programme, hosted in Sydney, which brings together Australian start-ups working in the disability space and provides some funding.

While the toys continue to undergo testing before they hit the market, Gurza says the focus for Handi is on eradicating the stigmas associated sex and disability.

He says that even when there is some form of representation for disabled people, it’s usually done by someone who isn’t disabled.

“There's not enough inclusion from the people on the ground living the experience,” he says.

How Handi
When building the brand and tone of voice for Handi, it was important for Morrison and Gurza to create something that was cheeky and playful instead of sterile or politically correct.

Morrison says the brand’s tone was modelled off Gurza’s personality.

“Much of the stuff around sex and disability, if it's written about, is not fun, not playful, not provocative,” Gurza says.

The brand’s tongue-in-cheek name came to life after the pair were joking around on the phone and realised that the name Handi not only reflected the product’s purpose to be “handy” but it was also short for handicapped and a colloquial term for the sexual act.

Oddly enough, it was also a weird amalgamation of both of their names.

To help bring the brand to life, Morrison enlisted the help of her fellow advertising colleagues who have worked on Handi across different areas including operations, project management and brand, web and social design.

“We've worked with an incredible team of designers who work in the social impact space,” she says.

“It was a journey because it was trying to take an embodiment of Andrew essentially, and the work that he's been doing and the impact that he's been able to have by pushing the boundaries by being provocative, by being playful, by opening up the lid, but then still doing things with a bit of a wink and a smile.

“Andrew has this amazing ability to talk about something in a really serious manner, but still make you laugh about it.”

Gurza says the branding is purposely colourful and bright, like the conversations on sex and disability should be.

“It can be tough and real and raw, but it doesn't have to be the saddest thing you've ever talked about,” he says.

“What I love about our branding is that we can have a really bright, colorful photo, but underneath have some like, ‘Hey, let's talk about real shit that's happening around sex and disability right now, leave a comment underneath’.

“So it really allows that conversation to be given some fun and some weight that it isn't from a doctor's office or from a pamphlet or from an academic tone, it's very playful.”

Social stigmas
Handi will initially be sold direct-to-consumer from the brand’s online website.

The decision, much like the idea behind the brand, was influenced by a need to be accessible.

“In New South Wales, for example, sex stores have to be on the second floor,” Morrison says.

“They're totally inaccessible. So unless you're selling online, actually it's an extra layer of inaccessibility for people who can't actually get up the stairs. All of them don't have elevators and it's just ridiculous.”

From an advertising and marketing perspective, Morrison says the brand will need to be tactful in its approach.

“I understand why the regulations are in place,” Morrison says.

“But it's also quite contradictory when you look at what can be advertised around men's erectile dysfunction, for example, and what you can get away with Viagra versus talking about sex and disability.

“Anytime you talk about sexual pleasure, which is a bloody human right, you get shut down.”

“We're exploring and experimenting with what kind of return on investment putting our money into Twitter is,” Morrison says.

“The other thing is I don't really want to dump a lot of my money into a platform that fundamentally doesn't believe in what we're doing and doesn't want to support us.”

Influencer marketing with the help of Gurza’s network, alongside public relations and more guerilla tactics will also be key to Handi’s introduction to the world.

Before the toys go out to market, Handi will also have a book out to help answer questions on sex and disability.

Gurza says he hopes the book will be able to answer questions that non-disabled people may not feel comfortable asking and further break down some of the taboos on the topic.

“It’s really about bringing them into that conversation and saying, you deserve to be a part of this too, because a lot of disabled people will probably have sex with a lot of non disabled people who don't know what the fuck they're doing and need a primary tool,” he says.

Morrison says the book will drive much-needed conversations and also help drive revenue for the products to be manufactured.

“But that is also a little bit of a revenue generator for us to help fund some of the manufacturing on the backend.”

So far, the feedback has been outstanding with support being shown from around the world.

Morrison says the idea has gone “gangbusters” with positive feedback reeling in from people in places like Amsterdam, New York and London, as well as Australia and Canada where Morrison and Gurza are based.

“It's one of those things where I think we realized early on, because it's such a taboo topic and because no one's really talking about it that you can't just kind of lift the lid and then put it back on,” Morrison says.

“We're not going to be able to just test and learn in Australia. It's going to have to be global from day one because it's a global need, it's a global conversation.”