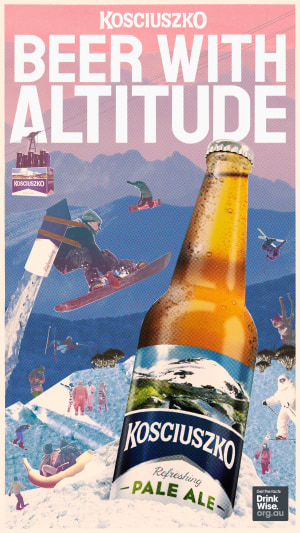 72andSunny has launched its first work for Lion with a brand launch for Kosciuszko Pale Ale.

This is Lion’s first "focused" marketing campaign for the brand.

72andSunny created the brand aesthetic, design and comms, including film, social and OOH, while UM handled media for the campaign.

A spokesperson for 72andSunny said the agency is looking forward to continuing its partnership with Lion.

“The 72andSunny team has collaborated effortlessly with the Kosciuszko brand team in producing a new aesthetic and way of bringing the Kosci spirit to life," the spokesperson says.

“We are absolutely thrilled with this new creative for Kosci from 72andSunny. It truly encapsulates what the brand is all about and it is fantastic to kick off its first ever marketing campaign,” Eadie says.

72andSunny was added to Lion's roster earlier this year, alongside Ogilvy who has been working the company since 2014.

In 2016, Ogilvy's remit for Lion was expanded which saw the end of BMF and Lion's 20-year partnership.

UM handled media for the campaign. The media agency won the account, estimated to be worth $54 million at the time, in 2016 from Bohemia.