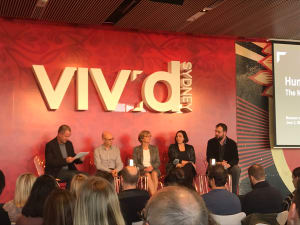 Every agency is grappling with how they tackle the churn and burn of agency culture, with the industry renowned for long hours and grueling pitch processes. The answer could lie in artificial intelligence, says The Royals head of strategy Michaela Futcher.

“Agencies are notoriously shit at burning humans out,” she said.

“We give really tight timelines and we expect a human to come up with lots of ideas but they just psychically can’t. Walk into any of the major agencies here or around the world and you’ll find people that aren’t coming up with ideas anymore.”

She welcomed artificial intelligence into the creative process alongside humans to assist them – not replace them.

“I love the notion of a machine sitting in on the creative process as the thought starter. Potentially a strategist or a data person could sit with the AI tech, putting in inputs to see what it could come up with," Futcher said.

An example of humans and machines working together is the Cognitive Marchesa dress, designed in collaboration between high fashion designers and IBM Watson for the Met Gala.

The dress incorporated IBM Watson technology into the framework of the gown and lit up in different colours based on the sentiment of Tweets about the dress.

Batstone said the introduction of an algorithm into the fashion world shows how technology can change the creative process.

“We’ve had some really great experiments in the world of fashion, music and entertainment to look at new ways of aggregating huge amounts of data and bringing it together to allow a designer to learn from the data and create in a different way,” she said.