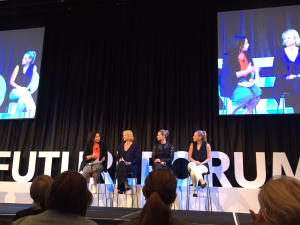 The all female Next Generation panel at NewsMediaWorks' Future Forum

OMD has just been named one of the Best Places to Work and Facebook is known for its new-age culture, complete with ping-pong tables and a newly introduced paternity leave program.

But even top companies are losing their staff to shiny new companies that offer more benefits, like free fitness classes and endless vacation days.

Speaking at the Future Forum event held by NewsMediaWorks in Sydney, News DNA MD Nicole Sheffield admitted News Corp often lost people from the technology and development sector to other companies who can offer more benefits.

Sheffield led the all female panel, joined by Domain chief editorial and marketing officer Melina Cruickshank, OMD trading account director Amy McDonald and Facebook head of media partnerships Karren Rogers, who agreed businesses need to work on their culture to appeal to the next generation of executives.

Earlier this year, AdNews reported figures from the MFA, which found media agency churn is up 31% compared to 27% in 2014. The biggest driver of this is staff moving to rival agencies, accounting for 11.9% of loss.

OMD's McDonald said the agency puts a lot of effort into training staff and creating a culture that can adapt with the industry.

She believes OMD’s ability to be agile is how the agency creates great culture within the workplace, but was also a driving force behind OMD winning the sought after Coles account earlier this year.

“Being able to prove we could be nimble and change things really last minute was key when winning Coles. There’s always price wars with Coles and Woolworths and Aldi – if something comes out in market, we need to be able to turn something around in 24 hours and get a campaign to market to combat that.

“A lot of it comes down to culture. OMD was just named in the Best Places to Work list and that keeps attracting people. It’s all well and good to win a big piece of business but if you don’t have the people to sustain it, what’s the point?” she said.

Keeping up with millennials

“The biggest challenge is keeping up with these technology companies,” Cruickshank said. “I don’t know if anyone has got it right – if you’re not a big business that can look after people – you have to tap into the leaders and make sure they are encouraging and training people."

She also said millennials expect pace, which can be hindered by the traditional matrix management model, used by News Corp and Fairfax, that sees individual staff answer to a reporting line.

“I’ve worked with the matrix set up before, and it’s challenging - I’m not a huge fan. It can actually be really difficult to get everyone to sign the dotted line – I try to avoid huge amounts of stakeholder management because it slows things down."

"Pace is what millennials expect now – they expect businesses to move really fast and if you aren’t doing that then you won’t retain them because they get bored,” she said.

Sheffield agreed, adding every business can benefit from giving young people a seat at the table and making them a part of bigger conversations.

Rogers said to combat the technological churn, Facebook is working towards creating more flexibility for employees.

“We know no one works a nine to five job anymore,” she said. “We are really trying to encourage people that there is flexibility within the business. When we get the right people, we need to be able to keep them on.”

Facebook introduced a four-month paternity leave earlier this year, and has now seen four fathers take advantage of the policy.

McDonald said OMD is acutely aware millennials often exit for other agencies, which is why it introduced a policy to help people move around internally.

“After 18 months OMD will help you move into another area, if you aren’t finding your work challenging anymore or if you’re bored of an account.

“We want fresh eyes on business – we don’t want someone who has been on an account for 10 years – we need to constantly change,” she said.