Red Cross has teamed up with MTV to create a campaign to encourage young people to "look after your mates". The campaign was conceived by MTV staff in a company wide initiative to come up with a creative campaign that would communicate the message in a way that would resonate with MTV's 16-24 year old audience.

The staffers came up with "dickhead" which will be broadcast on MTV from 1 March. It tells the story of Marcus who passes out after taking a pill at a party. While he is out, his mates draw a penis and moustache on his face, but the mood turns sour when Marcus begins to deteriorate and a mate calls for an ambulance. The campaign closes with "If you had to, could you save a mate?" 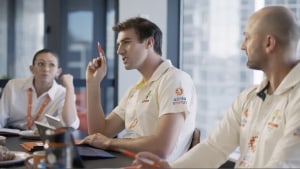 Pat Cummins answer his phone with his nose while contorted in a yoga pose.