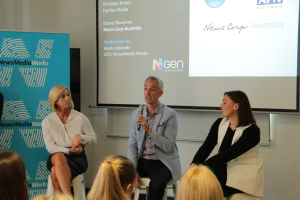 But despite the threat that brands tapping into content marketing could pose for publishers, News Corp head of asset integration Ebonie Newman believes media companies still have the advantage.

“Brands don’t know how to create content at scale and leverage the power of stories in a way that makes sense to them in the way publishers do,” she said.

“They need help in how to behave more like publishers.”

Speaking at an NGEN event held in Sydney earlier this week, Newman said that publishers are increasingly making moves towards content creation for advertisers, rather than just providing the distribution platform.

News Corp acquired social aggregator Storyful in 2013 for this reason and ramped up its content creation capabilities towards the end of last year.

During this year’s Rio Olympics, Coca-Cola teamed up with Storyful to pull user-generated content from the internet to be repurposed on the brand’s assets.

Storyful monitors the social web in real time to discover social content and eyewitness accounts during a broadcast or viral content that can be used by brands to create stories.

Coca-Cola used Storyful to source social content that would relate to Australians during the Olympics, alongside the company’s own content produced in-house.

One video on Coca-Cola Australia’s Facebook page showed a group of friends playing basketball in a swimming pool. It was used to celebrate Australia’s swimming team and basketball teams' successes. The video received more than 600,000 views and 800 shares.

“Storyful is a very different place for News Corp to play in and it’s a nod to the fact that we are driving innovation and change in many ways,” Newman said.

“The heritage of our business is creating stories. This is a way to tell them in a different way and make sense to new audiences.”

Fairfax launched its own content creation studio, Made, in early 2015. Kroon said a major reason for brands investing in making content with Made is to ensure brand safety.

“If your story goes wrong we know how to handle it. Working in a newsroom you deal with some nasty stuff around war and terrorism – we are used to dealing with people who say the wrong things on our platform. We know how to keep trust with our consumers,” he said.

“There’s huge potential to deliver to clients that just aren’t sure what to do. Because if you get it wrong, it’s a lot worse than not having a crack at all.”