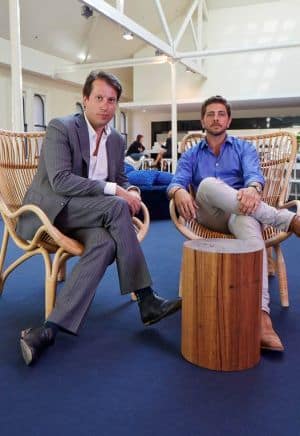 Jason Buckley and Ben Coulson at Y&R Melbourne this week.

When George Patterson Y&R Melbourne found out it had lost its 13-year client in Defence Force Recruiting, by far the agency's largest account, it was angry. But it wants to channel that anger. Jason Buckley and Ben Coulson talk to AdNews about the next chapter.

The news that Defence Force Recruiting was moving its business from GPY&R to Sydney agency Havas was a massive blow to the WPP agency which had produced award-winning and effective work for more than a decade, most recently with the much-lauded 'Mobile Medic' campaign.

But why did the client walk away from a relationship which had, by many accounts, been a successful and fruitful one? Several people in the market, including competitors who took part in the pitch, have proffered theories, most of which have involved the 'P' word – procurement. Those industry sources credited the procurement process with the decision to varying degrees, but they all agree Y&R didn't deserve to lose that account. Most were shocked to see it go.

Melbourne agency folk were also saddened to see the account move to Sydney, jeopardising the southern capital's ability to retain talent. Not good given the trickle of anecdotal reports of tough times and redundancies in Melbourne adland.

So where does that leave Y&R, thought to have employed at least 40 people on the Defence account? Defence made up more than half of the agency's business. In four months, when handover comes, that will leave a gaping hole.

“The reality of it is some of the best talent in the Melbourne market is working on the Defence Force,” Y&R Group national chief operating officer Jason Buckley said. “The real challenge is what do we do with the best talent in Melbourne when we've effectively lost a piece of business that I find extremely difficult to even explain why we lost it. Honestly, there's not a good reason other than change.”

Y&R Australia and New Zealand chief creative officer Ben Coulson was equally stunned. “We're fucking angry about losing this client. But we're backing ourselves and all of our best people are signing up as well.

“There is a sentiment in the industry, which is rare because we're such a carnivorous and often unpleasant industry to each other, of sympathy for what's happened. There's a fair bit of injustice in that decision and we had a week where, unusually, people and fierce competitors all responded by ringing us up."

When asked about others' hypotheses about the role of procurement in the decision, Coulson said the procurement department's formal feedback flagged its transition plan. “We were told it was a bit lighter than other companies, which is not surprising since we already had the business,” he said. “But apparently that was quite important to the procurement people, the length and breadth of our transition plan. You can read between the lines of what that's telling you.”

Buckley was more diplomatic. “Every industry is facing procurement and it's a healthy thing, it's part of what business is about,” he said. “What we should be saying is the winner of the whole thing is Havas. They beat the best in the industry – Clems, DDB, Ogilvy and the rest. Good on them and well done. Procurement is part of doing business in today's world. It is what is it and I respect and [you] have to admire the win by Havas.”

Procurement is always a prickly subject in the creative industries given the difficulty of quantifying strategy and creativity. It's hard to put a dollar amount on ideas, especially for creative agencies. For GPY&R, the concept that 'procurement is part of doing business' is cold comfort.

“So we're faced with a situation where we have incredible talent we either have to fire,” Buckley said, “or we can focus on how we can build and use the four months we have to try win and convert business.”

The first step was a bold, albeit poorly proof-read, ad in the Australian Financial Review the Monday after the loss, advertising the agency's ability to take on new clients due to a 'vacancy'. Buckley argued the ad had an incredible “galvanising” effect on the agency's staff.

Coulson said: “We're very proud of the work we've done and we're very confident of the agency we are. That ad last Monday was the beginning of the process of galvanising the staff around and we're offering everyone the opportunity to actually link arms and get on with it.”

When Coulson said “link arms”, he didn't mean for everyone to gather, sing kumbayas and get philosophical about the end of an era. He's talking about taking up arms and fighting to keep everyone with new business and organic growth.

Buckley said there's not a single client which the agency has 100% of its brand work right now and that is one of the first things he's targeting. The remaining Melbourne clients include Schweppes, AFL, Heinz, Cricket Australia, L'Oreal Melbourne Fashion Week and AGL.

However, the situation GPY&R has found itself can't be brushed over. It can't pretend it's 'business as usual' as many firms do after a big loss. The agency may very well have to let dozens of staff go in four months time. But it's not admitting defeat, nor is it entertaining the idea of a merger with fellow WPP agency Grey, which suffered a significant loss when the TAC moved its business last month after 24 years.

The agency is aggressively pursuing new business leads and was pitching this week. “This Christmas is a change Christmas. There is change in the air – creative talent, clients – and in our minds, the game is afoot and we're right in the thick of it,” Coulson added. “Christmas is a short one for us. We've got plenty on and we have a couple of opportunities in January.”

Buckley and Coulson both admit the Defence-shaped hole cannot be filled with one client – there's just not that many in Australia that big. But it's emboldened all the same.

GPY&R is a different agency to what it was three years ago. And a lot of that is thanks to Defence Force Recruiting which gave the agency its digital business at that time. Digital is now part of its core. That is widely recognised and it broadens  the business that GPY&R can chase.

“We are one agency with full capabilities and we're unique in that,” Coulson said. “That was built off the back of Defence. So what's happened in that time is that it's allowed us to work much deeper with all of our clients in a much more digital integrated way.

“We got a great head start on traditional ad agencies in terms of how to integrate, we're way beyond them on that kind of discussion. A lot of agencies say they would like to more than just ads for clients, but the difference is do you have it on your resume? Is it in your portfolio and can you show case studies on that kind of really big, impressive digital work? We've got that.”

Coulson argued the agency is well placed to take advantage of the change game. “Everyone's energised, angry and motivated. For me, we can do things other people can't do. That's why, right now, I'm excited about talking to other people's clients."