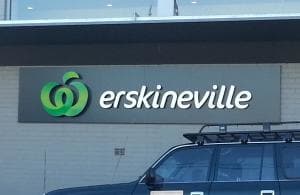 Woolworths has opened up in Sydney's inner west enclave of Erskineville. But curiously, except for the logo, the store is devoid of Woolworths branding inside and out.

The new store, opened two weeks ago, sits on the site of the old Hive building (also the former Mardi Gras headquarters) and boasts the Woolies logo on the outside, right next to a big 'erskineville' sign. Inside, there's no Woolies sign either. In fact, the only places where you see 'Woolworths' written anywhere is on its private label products.

One could theorise the move was designed to appeal to the local community of hipster-cool though increasing gentrified inner westies who are sometimes reticent about big chains. The supermarket's location on Erskineville Road has very few chain stores – there's a BWS liquor store – and it's only 200 metres down the road from where McDonald's was driven out of Newtown's King Street in the late 1990s due to lack of business.

In fact, when the proposal was first put forward for a supermarket in Erskineville in 2009, the local action group 'Friends of Erskineville' had opposed it and called for a boycott. Four years on, some residents, including writer Wendy Bacon, are still against it.

If Woolworths made the branding (or lack of) move to get the local community onside, it's keeping mum about it. When queried on why there was no 'Woolworths' plastered over the outside, a checkout assistant said it was because it was a concept store and while it was “owned by Woolworths, it wasn't a Woolworths”.

It's certainly different to your everyday Woolies. You won't find slabs of 24-pack Coca-Cola stacked up (the shelves are lower than your eyeline) but you will find a stack of ready-made meals and a Vittoria coffee cafe with free WiFi.

A Woolworths spokesperson said that while in the past its stores were similar in appearance, it was increasingly looking at what will appeal to local communities. He cited other examples of new initiatives including a beauty bar in its Town Hall store, a sushi store at Neutral Bay and a cafe inside the Kellyville store.

So, far the reaction on social media has been mixed. Several tweets praised the convenience of the new store while others joked about the store as the "closest capitalism will get to Newtown".