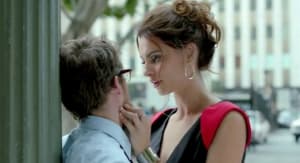 Chrysler's Fiat 500 Abarth commercial has been deemed as showing "unsafe driving" and to be unsuitable for a PG audience by the ASB.

Centrepoint Tamworth has defied the ad watchdog's ruling and refused to pull an ad which used a women's cleavage to promote its 'Entertainment Quarter'. It now faces "further action", warned the ASB.

The Tamworth-based shopping centre came under fire for a large out-of-home ad which showed a computer-generated image of a woman's cleavage. It was aiming to promote its 'Entertainment Quarter' and carried the words "Double the Fun".

One consumer told the Advertising Standards Bureau (ASB) is was "exploitative and sexist" as it showed a pair of "disembodied breasts not connected to a person". The complainant argued it was not relevant to the shopping centre and was "inescapable" due to its size and central location.

The ASB ruled that the ad wasn't relevant to the venue and its text, "Double the Fun", could be considered to show as "a woman's chest being for entertainment". It upheld the complaint on the grounds that it was "exploitative and degrading" and was a breach of Section 2.2 of the Code and must be modified or discontinued.

However, the shopping centre refused to agree with the decision for several reasons. The first was that the ad didn't actually show a real pair of breasts. "It was an airbrushed image of a photo of the artist's bent elbow and forearm", claimed the venue. "We did not want to make this public", it said.

"The effect was achieved in Photoshop [...] and the artist is happy to demonstrate his skills if you would like to see how it was created."

The shopping centre also argued that it was meant to be funny despite being "slightly risque", and that it had received "nothing but positive and humorous responses" from consumers, barring the above complaint. Furthermore, it claimed the campaign's expiry date was fast approaching and would "be removed in due course".

The watchdog said it had forwarded the response to the relevant local Government for "further action".

Meanwhile, the ASB has also upheld a case against car giant Chrysler for its recent Fiat 500 Abarth commercial. The television ad showed showed a man imagining the car as a woman, whom then flirts with him before slapping him. It also showed footage of the car driving and skidding on a road, and carried the tagline "You'll never forget the first time you see one".

One consumer told the watchdog it was "far too explicit for TV" and "didn't portray woman in a positive light and also equated her with the car".

The watchdog aligned the ad in relation to Federal Chamber of Automotive Industries Advertising for Motor Vehicles Voluntary Code of Practice (the FCAI Code), finding that it showed the vehicle moving at "excessive speed in a manner which unsafe".

It also found that the ad depicted a "sexualised scene, including slapping, [...] which was not sensitive to its PG audience." On these grounds, it upheld the complaint.

The watchdog did however rule that it wasn't degrading towards women, as the consumer had suggested. Chrysler said it would modify the ad and that in the meantime it had been taken off air.

Do you find the ad offensive? Let us know your thoughts in the comments below.