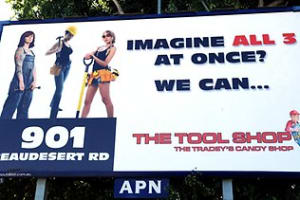 Ads from hardware store The Tool Shop and menswear brand Roger David have been banned by The Advertising Standard Bureau (ASB) for its discriminatory and sexual content.

A billboard from The Tool Shop depicted three women dressed in different tradesmen uniforms accompanied by the taglines "Imagine all three at once? We can..." and "The Tradey's Candy Shop".

A complainant wrote of The Tool Shop's ad: "This ad offended me by suggesting that women are sexual objects. The line 'How about all three?' suggests the idea that a man can use these women (and therefore all women in general) as objects for his own gratification."

The advertiser defended the ad: "The women are in no way dressed 'provocatively', nor is the tagline referring to anything sexual. We also struggle to comprehend how this billboard in any way, shape or form could 'suggest that women are sexual objects'."

The ASB board found the ad had breached the Australian Association of National Advertisers' (AANA) Code of Ethics because it discriminated or vilified women.

The board said: "The connotation more likely to be taken from the advertisement by a reasonable consumer is that the advertisement is referring to being able to have sex with the three women at once. The board considered that this suggestion and the overall advertisement clearly presented the women as sexual objects to be purchased or used and did so in a manner demeaning to women."

The Tool Shop has agreed to take down the billboard and will modify the ad for any future use.

Roger David also came under fire for an email campaign that depicted a young female posing with a Union Jack flag disc in her open mouth and the word "Slave" and a barcode tattooed on her body. The ad received complaints that the young female posing looked underage and for the sexual nature of its content.

A complainant said: "It is offensive due to its representations of young girls as vulnerable and slaves and lacks sensitivity to the growing child exploitation and sexist depiction of girls and women."

Roger David wrote in response: "The woman used in the campaign was 18 years of age. The relevant audience of this advertisement is young men. Roger David strongly believes that young men would relate to this image, and would not see it as shocking or exploitative."

The ASB board determined the ad had also breached the AANA Code of Ethics.

The board said: "The advertisement inappropriately depicted a young girl in a sexualised manner and that this depiction was not a treatment of sexuality in a manner sensitive to the relevant, in the case adult male, audience."

Roger David has discontinued the advertisement and has pledged to not use it in any further campaigns.