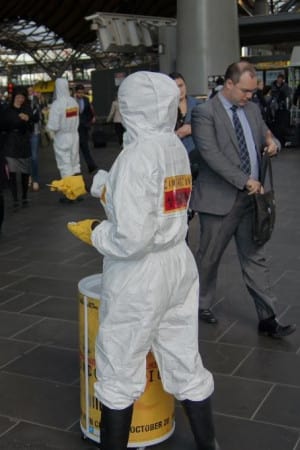 Roadshow Films has been promoting its upcoming outbreak film Contagion with hazmat-suited figures distributing anti-bacterial wipes at train stations in Sydney and Melbourne this week.

Devised by OMD Fuse, the campaign started on Monday to tie in with a wrap in mX newspaper, with targeted areas including Melbourne's Southern Cross and Flinders and Sydney's Central station.

The branded anti-bacterial wipes have a bio-hazard symbol and an ad for the film, which comes out in cinemas tomorrow. In addition to the experiential component, the marketing for the film includes outdoor, television, online and targeted in-venue digital signage, including toilets.

Dren said the campaign had been much more successful than anticipated: "We had ordered about 90,000 towelettes and there are eight hazmats in each state. We have actually had to pull back on the hazmat guys because there are so many towelettes being distributed and we want to be able to keep it going until Thursday."