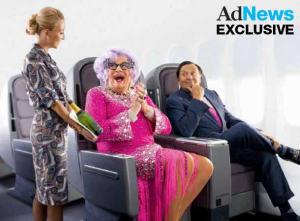 EXCLUSIVE: Qantas has called a global review of its creative and media agency arrangements for the first time in ten years, triggering a race for a berth on the roster of one of Australia’s most coveted advertising accounts.

The above-the-line ad spend is worth an estimated $30 million locally, but including overseas markets, sponsorship and the airline's relationship with Tourism Australia, is worth considerably more.

Roster agencies M&C Saatchi, Ogilvy, Mojo, Wonder and media buying and planning agency, ZenithOptimedia, have all been invited to pitch. Agencies were put on alert this morning.

The business covers four large regions; Americas, Europe which includes South Africa, Asia, and Australasia. The national carrier intends to expand its suite of agencies as part of a five-year plan to build a “truly modern, customer-focused and competitive global airline business”.

The Qantas Frequent Flyer programme, handled by M&C Saatchi, is unaffected by the review, which is being facilitated by Melbourne-based Enth Degree.

Enth Degree has already helped complete due diligence on the industry following a mini-pitch for an intermediary. The appointment of Enth Degree has led to the development of a timetable and key dates that will provide a framework for the advertising and media roster.

A long list of agencies, which will number between seven and eight, will be compiled in the coming weeks, with a list firmed up in October.

A second stage will commence in the January to February period, in which a shortlist of agencies will be determined. The final roster is expected to be announced towards the end of March.

The first activity from the new roster is planned for the post-London 2012 Olympics period.

Qantas has drawn up a framework of five distinct streams, four of which encompass creative, with the fifth stream covering media planning and buying. The brief places a strong emphasis on strategy.

The four streams are as follows: strategy and brand, digital, sponsorship and experiential, and best of breed in international markets. The international agency will need to have a strong capability in the majority of Qantas' key international gateways; Sydney, Auckland, London, Singapore, New York and Los Angeles.

Qantas executive marketing director, Lewis Pullen, told AdNews: “We're looking at whether we have a best of breed in all of our international markets. We're a global business and we need an international network to support the brand so we're taking the opportunity to review that as well.”

Pullen stressed that the first stage of the pitch process does not include creative presentations, and will be limited to capabilities, credentials, and a small amount of strategy. There will also be “some staggering” between the four creative streams and the media stream.

“It's going to be really fascinating to see whether the full-service agency one-stop model can deliver that or whether you have to go to a much broader group of creative partners to deliver across all of those streams. It's actually going to test the inherent structure of the agency market I think. The outcome is going to be quite interesting for the industry as a whole. It's up to the agencies to come back to us with their best people and they may not be sitting in Sydney,” Pullen said.

In a potential move that has echoes of Commonwealth Bank's controversial appointment of US ad agency Goodby Silverstein in 2007, Pullen did not rule out employing the servies of a foreign agency to produce local work.

Agencies will have the freedom to pitch for all four streams, or focus on just one stream. The five streams do not include PR, design, and loyalty, or the planned premium Asian-based airline, which is in the very early stages of development. The no-frills Qantas-owned airline Jetstar is also excluded from the review.

The pitch process will be led by Pullen, in conjunction with executive general manager, commercial, Rob Gurney, who will consult with chief executive, Alan Joyce.

Gurney explained the reasons for calling the review in an exclusive interview with AdNews: “We have a great partnership with these agencies. These guys have done some of the best work ever produced in Australia, award-winning advertising that still to this today wins popular consumer awards such as 'I still call Australia home.' In running a business we have to critically assess everything that we do, always. We have that obligation to our staff, customers, shareholders and other stakeholders.

“I don't want this to be viewed in the context of 'this is an advertising agency review' – it's a much broader part of our business ethos than that. It's been more than a decade since some of these agencies have been appointed. That's not to say we haven't had reviews and contract negotiations in the last ten years. But the industry has evolved very rapidly in the last ten years. There's new media that wasn't around when these agencies were appointed. With new media and models, has come opportunities to review how we set ourselves up for success in a more effective way going forward. We're going into this with a very open mind.”

Gurney said the airline had no plans to reduce ad spend going forward. According to the Top Advertisers Special Report exclusively published in the current issue of AdNews in conjunction with Nielsen [page 32, 23 September 2011], Qantas spent an estimated $27.4 million in the year to June, up $3.1 million year-on-year.

Pullen said the airline's iconic strapline 'Spirit of Australia' is not under threat, but other brand positionings may fall under the axe.

Pullen said: "We've got our brand strategy in place and our core identity won't change. We've got an incredibly open mind as to where we land with this. We don't want to be prescriptive about outcomes, part of this exercise is about getting an unfettered and unencumbered view of potential partners around how we can take our brand forward and better manage our marketing and communications."

Signs that the winds of change were beginning to blow through the Qantas marketing department were evident in recent months.

In a major departure from traditional activity featuring the signature Qantas red, the airline introduced a splash of pink in a recent execution for its Business Class offer featuring Dame Edna. Hot on the campaign's heels was another edgy burst of activity to support the airline's association with the Wallabies.

A branded content campaign, co-written by writers from TV show The Chaser, is being aired on Sky News and through Nine Network, Fairfax Media and Telstra mobile.

The films, which are available to watch online, follow a convoy of 25 motor homes travelling to matches at the Rugby World Cup.

The more progressive branded content approach is a nod to Pullen's background, who has a strong background in production, and is driving fresh thinking at Qantas.

The review comes at a turbulent time for Qantas, which is involved in a tussle with unions over over job cuts and is under renewed pressure from Virgin Australia, which unveiled a major rebrand earlier this year.

Have something to say? Send us your comments using the form below or contact the writer at darrendavidson@yaffa.com.au