Programmatic: the machines are coming, but they come in peace 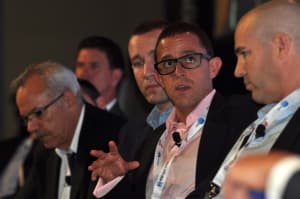 Media heavyweights lined up yesterday to try and reassure salespeople the machines would not take their jobs.

“We will not dispense with humans,” he said. While it will take the pressure off buying, that means media agencies and companies can concentrate on more cerebral stuff, he suggested.

“The idea that you can just plug in a machine and dispense with humans is a myth.” However, he added one caveat: “At least in the medium term.”

Outgoing Mindshare boss James Greet said that programmatic was just about doing things more quickly – and was needed to manage booming levels of inventory. Mindshare's had doubled, year on year, he said. “The reality is that unless you bring in technology there are cost and time implications of [that growth].”

Greet said any transition would not happen overnight, but media owners and agencies needed to plan the transition from horse trading to strategists. “I suspect companies have not thought enough about that," he said.

Bauer sales boss Tony Kendall agreed he had given it not "a lot” of thought. But that was because Bauer's business “was about ideas, people, events, promotions, content integration … You can't do any of that shit programmatically.”

APN Outdoor CEO Richard Herring said it was probably too soon for the outdoor industry to start thinking about programmatic trading, given that the sector only got an audience measurement system together in 2010. “Let's not get spooked about it,” he said. “There are many issues for clients to understand. For us to go into a digitised trading system would add more complexity.”

However, Group M CEO John Steedman, who earlier had said 70% of the group's digital portfolio would be traded programmatically within two years, had a word of warning.

“We are doing programmatic buying in the US with outdoor and radio as we speak. So it is coming...”