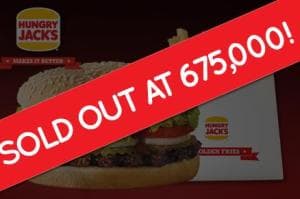 Last week's Hungry Jack’s deal with Scoopon may point towards a new phase of innovation in group buying, despite a decline in money spent by consumers in January and February.

In a matter of days, the $2 burger and fries offer was downloaded almost 700,000 times. However, the ‘deal’ did not require an upfront financial commitment from a customer, in contrast to the prepaid model usually adopted by group buying sites.

Scoopon general manager of sales Jon Beros told AdNews the redemption rate of the vouchers on the first and second day of the deal was “very high” and exceeded expectations. He said the target redemption rate for the promotion was 70% or 80%.

Naked Communications founding partner and consumer psychologist Adam Ferrier said the Hungry Jack’s model was a great way to introduce group buying to a new group of consumers. “It is a really good example of establishing an approximate behaviour to the end behaviour you want them to take,” he said.

In the past the daily deals market was generally reserved for smaller local businesses.

However, figures released this week by analytics and data consultancy Quantium showed money spent on group buying has declined 34% since its peak in August 2011. Data for January and February showed the market had returned to ‘pre-boom’ figures not seen since April 2011. Quantium principal Chris Walton said it may be due to seasonality, fatigue or poor customer experience.

He said the figures are not limited to Australia, with overseas markets seeing similar trends.

But Telsyte’s Yip contended the group buying sector will still grow 30% this year to $650 million and attributed the decline to seasonality and a stabilising of the market.

This article first appeared in the 23 March 2012 edition of AdNews. Click here to subscribe for more news, features and opinion.