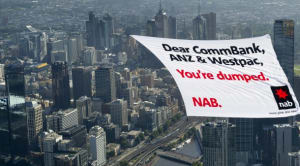 EXCLUSIVE: National Australia Bank's (NAB) search marketing account, one of the most profitable in the country, has been placed out to pitch after the bank's recent appointment of Mindshare as its media agency.

The banks confirmed the pitch has been kicked off, but would not confirm which agencies were competing, although AdNews understands the four-way tussle is between Mindshare, OMD, iProspect and Atomic Search.

One source suggested the search business is worth at least $6 million, which would make the business one of the more lucrative search accounts in the country.

The incumbent on the account which ZenithOptimedia, which had previously handled the wider media account including search. When the agency had been dropped from the broader account earlier this year, NAB had decided to split the search account out from the media business.

Just last month NAB appointed Mindshare as its new media agency, but a decision on the bank's new search agency is not expected until the end of December.

A NAB spokesperson said: “We can confirm that a search marketing pitch process is taking place. We expect to announce the successful agency before Christmas.”

The finance and banking category is one of the most competitive sectors in the search marketing space, as financial institutions compete to outspend their rivals and hence gain the highest rankings in spaces like Google.