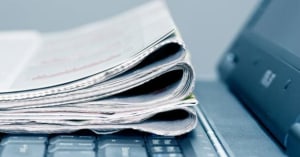 Digital subscriptions were the great white hope for newspapers. But the first round of comparative stats for combined print and digital sales have arrived and suggest only The Australian is moving in the right direction.

Circulation figures for the June quarter have been released by the Audit Bureau of Circulations (ABC), alongside the first year-on-year comparisons for combined print, digital and package sales (masthead sales).

In total, the print market saw a 10.9% year-on-year decline in sales, with News Corp Australia titles dropping 9.7% in total and Fairfax 16.4%. The declines appear to mirror the two companies' strategies. News Corp has remained focused on its core print products while expanding its digital footprint. Fairfax has focused more strongly on digital.

In NSW, overall masthead figures for  the Monday to Friday edition of The Sydney Morning Herald declined 14.8% year-on-year, while the Saturday edition has plummeted 18.7%. The Sun-Herald tumbled 18.8%.  That suggests paid digital growth is nowhere near sufficient at present to balance out print circulation decline.

In Victoria, the story for Fairfax is considerably less bleak, but is still in the negative territory. The Age Monday to Friday edition saw its combined print, digital and package sales drop 6.9%, with Saturday masthead sales falling 9.6% and the Sunday Age declining 5.4%.

Year-on-year masthead figures are only available for Fairfax titles, as News Corp did not start providing combined print and digital statistics until September 2012. However, The Australian looks like it could buck the downwards trend. While the title's print circulation declined 9.8% year-on-year in the June quarter, the title's masthead sales figures have been steadily increasing over the last few months.

Looking to print-only circulation figures, the results in the June quarter were particularly bleak. Not a single newspaper recorded positive growth, and across News Corp and Fairfax the best result was a 6.8% decline recorded by Fairfax's weekday edition of The Australian Financial Review. The strongest result across the whole market was recorded by West Australian Newspapers' West Australian, with a 3.8% drop.