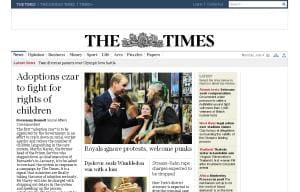 Rupert Murdoch's London paper The Times has attracted 100,000 digital subscribers following the launch of its paywall last year, as The Australian prepares to introduce its own paywall.

The Times reportedly now has 101,036 people signed up to its digital platforms including website, iPad and kindle wireless reading device.

In July last year, News International, which is owned by News Limited publisher Rupert Murdoch, announced that readers would be required to pay for access to www.thetimes.co.uk and www.thesundaytimes.co.uk.

News has claimed a 28% increase in digital subscribers over the last three months. At the end of February, the number of subscribers was said to be 79,000.

News International chief executive officer Rebekah Brooks reportedly said: “One year on from launching the paywall, we’ve proved people are willing to pay for quality journalism in digital formats. Many doubted if our strategy would be successful; here is unequivocal proof it’s moving in that direction.”

Meanwhile, The Guardian News & Media has announced it will do away with its international print versions of The Guardian and Observer.

The move is part or the publisher’s new “digital first” strategy, which it announced in June. The process is designed to cut costs amidst increases in digital audiences and declines in print revenues.

At the same time, News International has introduced a new editorial structure for The Times and Sunday Times, and The Sun and News of the World.

Previously, each title has had its own managing editor. Under the new model, there will be a single managing editor working across both The Times and Sunday Times, and another on The Sun and News of the World.

Have something to say? Send us your comments using the form below or contact the writer at lucybarbour@yaffa.com.au