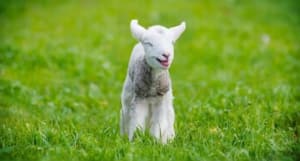 The newly launched Animals Australia campaign, dubbed 'A Day Off', encourages consumers to celebrate the forthcoming national holiday with "cruelty-free tucker" and to give animals a day off the menu.

The irreverent-yet-serious push was introduced with an email from the not-for-profit organisation, hacking into MLA's lamb-focused campaign, arguing it had "hijacked" the holiday and suggesting that a person's cultural identity was not reflected with their meat intake.

It said: "It's hard not to notice that Meat & Livestock Australia has hijacked Australia Day! Strewth — any visiting tourist would think that Sam Kekovich is the father of Australia and that it's a local tradition to lob a little lamb on the barbie to prove how Australian you are! Crikey — it's just a multimillion dollar marketing campaign to sell more lamb!"

The email, which encouraged consumers to eat "cruelty-free tucker" on Australia day, also claimed overconsumption of meat can lead to health issues including obesity and heart disease.

It argued: "MLA's campaign to urge Aussies to eat more animals should be no laughing matter.

"Australians are facing a rising obesity and heart disease epidemic — conditions linked to the over consumption of animal products.

"This Australia Day, we're calling on all true-blue Aussies to help animals, our health, and our planet ... because being Australian is more than just abbreviating all your words with the letter 'o'. Bloody oath. It's about taking a stand. Doing what's right."

However, Meat and Livestock Australia's group marketing manager Andrew Cox dismissed the organisation's new push, telling AdNews: "It's somewhat flattering if the vegetarian lobby wants to pay homage to our campaign in such a manner, but I think they've got a serious case of Lambnesia if they think Australians will stop eating our national meat on our national day."

MLA rolled out its annual Australia Day campaign earlier this month, fronted by the brand's long-term ambassador Sam Kekovich. It kicked off with an execution featuring Kekovich suffering the effects of eating too-little lamb, a condition dubbed 'Lambnesia'.

What do you think of the Animals Australia campaign? Let us know your thoughts in the comments below.