Labor's Nakedgate: Here's the agency brief which got it sacked 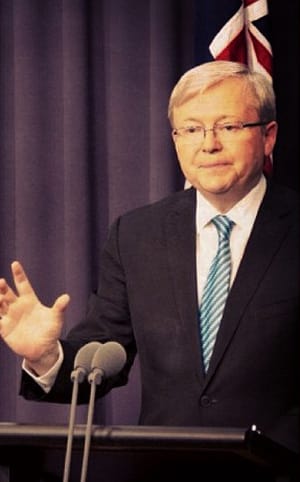 Download Naked’s “Rudd Brief” here to see why it got sacked from Labor’s election team.

Naked’s sudden sacking by Labor over its attempt to offer Kevin Rudd interviews to youth media in return for “providing inventory” – online advertising space, that is – has drawn both suspicion about Labor’s knowledge of the arrangements and derision of the agency.

The Sydney Morning Herald’s political reporter, Jonathan Swan, who broke the story today, said “it seemed very odd” that Labor was oblivious to the deals offered to online youth sites like Vice and Fairfax Media’s The Vine.

“It seems very odd that no-one in the Labor Party knew this was happening when it had their name on it and their brand,” Swan told AdNews. “The one party which will suffer out of all this will be Naked.”

However, Fairfax Media’s director, News Media, Garry Linnell, was less conciliatory over Naked’s attempt to leverage free advertising in return for an interview with Kevin Rudd.

"[This was] obviously a ham-fisted attempt by the agency and it was quickly dealt with by the PMs office," he said. “The strategy has been widely ridiculed by both the advertising industry and journalists and it's safe to assume we won't see this type of approach again."

And Labor has officially rejected any suggestions it was aware of Naked’s strategy.

Naked substantiated that claim, suggesting that the ads for interviews idea was not part of the brief agreed by management.

"Naked was engaged by the ALP to work on a small project and are no longer working with them," said the company in a statement. "Unfortunately the relationship has terminated due to some activity that took place which was not authorised by the ALP or part of the brief agreed by Naked management. We will not making any further comment at this stage and will be in touch if we have anything further to add."

The company now faces a battle to regain its credibility in a move that has surprised the industry and opened up an immediate opportunity for a chunk of the ALP campaign account.

Gabriel McDowell, MD of PR firm Res Publica agreed that the ALP would likely emerge from the affair relatively unscathed. But he pulled no punches on how Naked had gone about its business.

“From a crisis management perspective, and based on the reported facts so far, I think the ALP has reacted promptly and appropriately to try to limit reputational damage to the Labor brand.  They have made it clear they didn’t sanction the offending proposal and firing the responsible agency was a justifiable response given the seriousness of its misjudgement.

"And there can be no doubt that it is a whopper of a misjudgement because building trust and understanding between a brand and its public is the fundamental objective of any communication campaign and deliberately blurring the lines between editorial and advertising can only erode trust when it is uncovered.”

Alyx Gorman, editor of The Vine and whistleblower on the attempted deal, said that whereas big brands understood the separation of advertising and editorial, she was shocked by the approach.

"It has never happened before. My mouth was on the ground. Young people are politically engaged and this is not the way to go about appealing to them. It is why we tend to shy away from the major parties."

She told AdNews it was "exactly the sort of thing that is killing media", but that brands generally grasped the value of editorial over paid content.

"Big brands are in the business of getting press. They wouldn't try that. If they want an ad they pay for it. It is very simple."

But Tim Duggan, content director for youth publisher The Sound Alliance said that the youth market was fine with an ed-ad content mix provided it was done transparently.  This example he said, was the opposite. "The whole brief feels like secret handshakes going on to deliberately mislead the audience."

Vice, one of the other magazines approached by Naked, said that there was no agreement struck around any editorial or advertising. "As far as we can tell, the interview isn’t happening."