Jim Beam: We can beat VB in three years 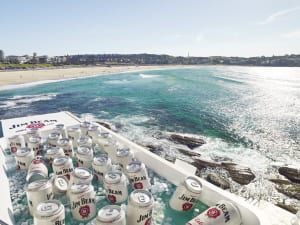 How do you market a 'bogan' drink to Bondi folks with nice skin and little dogs? By filling their precious Icebergs pool with giant Jim Beam cans, of course.

Last Thursday's stunt, which marked the start of the Jim Beam's 'Make History' campaign, was also an attempt to reinvent the brand and break some long-held stereotypes.

According to Aztec data, the Kentucky bourbon is currently the number two trademark in terms of retail value behind VB. Jim Beam brand director Ray Noble hopes the new direction will help it take the number one spot.

“If you look at the categories at the moment, it's really only North American whiskey and cider that are growing – the rest are in decline,” he said. “My vision is to be the number one beverage trademark. It's probably two or three years away, but this is the start.”

Noble admitted Bondi was “probably a 'non-traditional' bourbon area”. “The reality is Jim Beam is drunk all over Australia, but yes, there's stereotypes. We want to break a bit of that and lift it up for everyone.

“We're toning down the masculinity a bit. Guys care a lot about what girls think of them – we don't want a guy to feel embarrassed because he's got a Jim Beam in his hand. We're trying to get rid of that stigma.”

Damian Pincus, creative partner of The Works, said: “If you want to change people's perception about a brand, the fastest way to do that is via association, by putting your brand in a place people don't expect.

“We've just been talking to people, hipster dudes walking around here, and they're going, 'That's pretty cool.' That's what we want.”

The giant cans will feature in the campaign TVC set to launch on Anzac Day.